Would you rather spend time profiling your app or adding new features?

Most software developers would rather work on their app than profile it. The app profiling process is not always intuitive, and app profiling tools generate complicated graphs which you then have to interpret. Often power and thermal measurements are not provided and its not clear how your app stacks up compared to others.

That’s why we’ve released App Tune-up Kit, a brand new way to profile your app via a one-touch tool for Android devices that is designed to profile any Android app in comparison to other apps. App Tune-up Kit combines our years of experience in profiling with the most common questions about app performance to come up with a tool that’s easy for casual consumers to use. It also rolls up detailed information that software developers would otherwise spend hours or even days trying to collect and organize.

App Tune-up Kit works on any smartphone or tablet running Android 4.0 or later. It should work with any processor, but those with a Qualcomm® Snapdragon® processor will get extra features like accurate battery power measurements and the ability to rate your app against the top 20 apps in Google Play.

You start App Tune-up Kit by selecting any app on your mobile devices (see Figure 1). This launches the selected app and moves App Tune-up Kit to the background so it’s out of the way. Just use the app like you normally would. In 60-seconds App Tune Up Kit will appear again and the results of the tests will be displayed in an easy to understand dashboard. 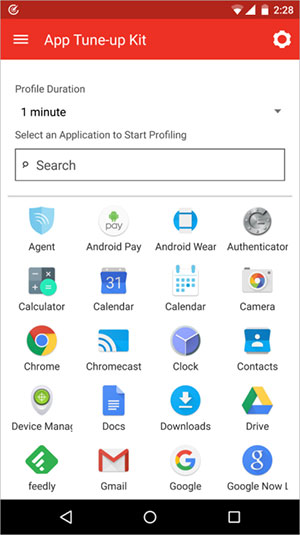 Then you can explore your app’s performance in four easy ways: 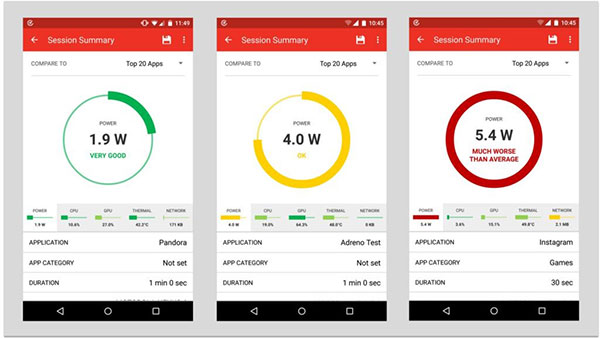 This software makes it easy to determine how much power is consumed when your app is running, and how warm the processor gets. Both of those questions are important to consumers, and the answers can affect app performance.

Even developers who would like to power profile their app usually stop short because real-time measurement isn’t easy. Hardware tools like the Monsoon Power Monitor are needed, but they’re expensive, and many phones require that you disassemble the device in order to get access to the battery.

Beyond the difficulty, though, the results might not tell you much. Is it good or bad when an app consumes 1400mW? It all depends on context, so the dashboard, which is displayed after you profile an app, uses color and easy to understand text labels that make it clear whether the power consumption of your app is good, OK or higher than average.

“What’s everybody else doing?” That’s a natural question, and App Tune-up Kit addresses it by comparing the results from your app with results from other apps out there.

When you profile on devices powered by the most popular Snapdragon processors (for example, the Google Nexus 6P, HTC One M9, Motorola Droid Turbo 2, LG V10, Samsung GALAXY S5 or Sony Xperia Z5), App Tune-up Kit automatically rates* the app you’ve profiled against averages from the Top 20 apps in Google Play. That gives you an idea of how your app compares to the ones that millions of users are installing.

Next, you can rate your app against others in the same genre, like gaming. You’ll see how you compare to apps just like yours and figure out where you stand in your category.

Comparisons To Your Competitors’ Apps

Now suppose you have a particular competing app in mind. Wouldn’t you like to know how yours compares to it on CPU, GPU, power, thermal and network profiling?

The Compare Sessions feature shows you that information as well. For example, if your app were Reign of Amira and your competitor’s app were called Adreno Test (see Figure 3), you’d see at a glance how your app compares in over 30 different areas. 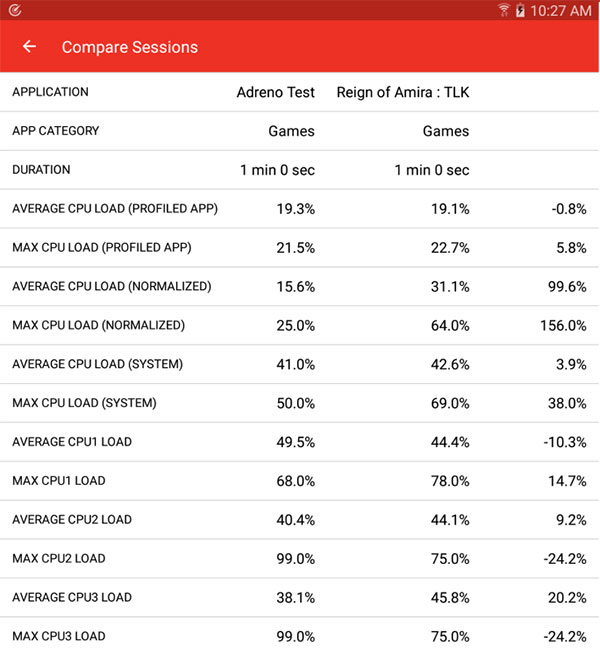 You could spend hours profiling your app using conventional software and still have no idea how it compares with other apps.  With a single touch, App Tune-up Kit collects data in 30 important areas and then rates your app against the top 20 apps or a single app of your choice.  Soon App Tune-up Kit will provide recommendations on how to improve your app based on a single test.

Best of all, App Tune-up Kit is available on Qualcomm Developer Network. This software is the easiest, quickest way to get the most detailed profiling information about your app with the least effort.