What do you do when your always-on application needs image processing, computer vision or machine learning, but it keeps maxing out the CPU and causing cores to shut down from thermal throttling?

“Must be time to look at parallel processing and heterogeneous computing,” you say, “and maybe offload some of that work from CPU to GPU and DSP.”

Good idea. Why limit your compute-intensive tasks when you can run them on the GPU, DSP and other devices and manage them from host code running on the CPU?

But I hear most developers talk about parallelism and heterogeneous programming in one of three ways:

What is the Symphony SDK?

Most developers know when their app has maxed out the CPU, but they don’t usually know the overall system state well enough to take advantage of heterogeneous computing. The parallelism and heterogeneous computing you get with Symphony can be your path to fully utilizing the Snapdragon system on a chip (SoC) and getting the same or better performance with lower power consumption. 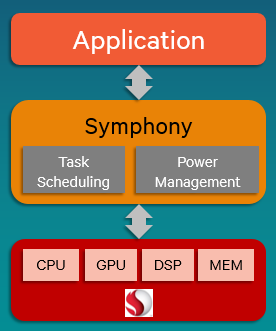 Here’s what’s inside the Symphony SDK:

How can I Use the Symphony SDK to Reduce Power Consumption and Thermal Profile?

The SDK is designed to meet developer needs at all three levels:

The fastest way to build a Symphony application is by using predefined Symphony building blocks, called patterns. If your parallel algorithm matches one of the parallel programming patterns in Symphony, then you can use the pattern directly. In the following example, a simple substitution of the symphony::pfor_each pattern parallelizes a for-loop that processes elements in a collection: 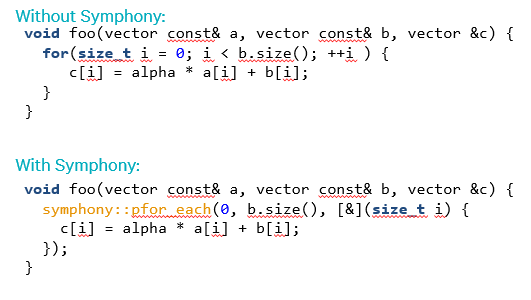 On the simplest level, that example applies to developers who want to use more CPU cores because they are maxing out the CPU, or who want to use the CPU in a way that doesn’t cause overheating.

At the experienced level, developers want to use the GPU and DSP much more effectively and manage the power state better. Beyond parallelized for-loops, big.LITTLE affinity is important for allocating tasks appropriately among big, power-intensive cores and little, power-efficient cores.

Consider an always-on, H.264-like video encoding algorithm. It is implemented as a soft encoder (4 big and 4 LITTLE CPU cores) with a target frame rate of 30 fps at 1080p. The hardware is capable of delivering almost 40 fps in bursts using all 8 cores, but recurring thermal alarms cause cores and frequencies to ramp down and back up constantly, resulting in a moving average of less than 20 fps. The encoder would not be thermally sustainable in a long-running application like video surveillance or driving.

By invoking big.LITTLE affinity through the Symphony SDK, as shown below, the algorithm can encode with 2 big and 4 LITTLE cores: 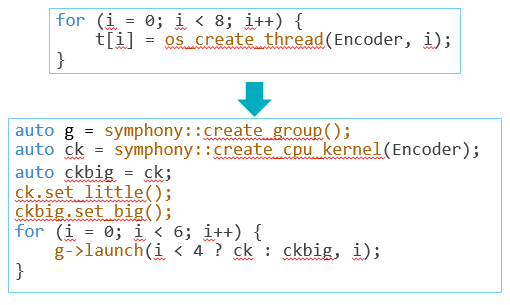 The encoder is designed to avoid thermal alarms and comfortably deliver 30 fps at 1080p on the same hardware.

Even for programmers well versed in heterogeneous computing, Symphony is engineered to simplify work by managing the power states dynamically and distributing work on the basis of constantly changing system state: for example, the number of cores currently active, the workload pending on the CPU, GPU and DSP devices, and the power/frequency states of the devices. In far less code than it would take if developers wrote it themselves, the sample below shows how Symphony can offer power control over frequencies and flexibility in moving data and computation to any device (CPU, GPU, DSP): 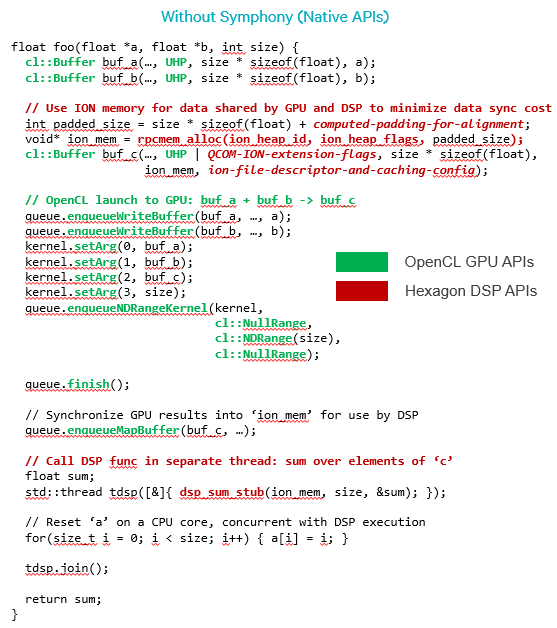 In contrast, Symphony is designed to automate these optimizations based on the task graph and some high-level hints, as shown below: 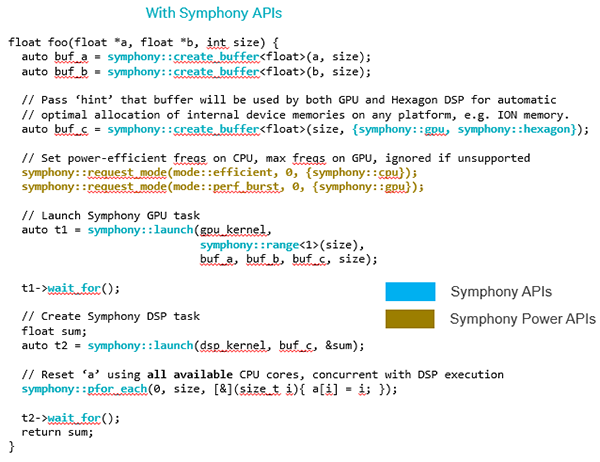 As you push more compute-intensive tasks onto mobile processors, you start to realize that parallelism and heterogeneous computing can relieve hot spots and thermal problems in your apps. Symphony is designed to use less power and lower frequencies for the same or better performance. It matches the instruction set architecture (ISA) of the GPU, DSP and other cores to the specific nature of the work and it matches the device power states to the work.

Download the Symphony SDK now, then have a look at the sample apps. There’s something in the SDK for beginning, experienced and expert developers alike. In the documentation you’ll find a Getting Started guide, tutorials on parallel processing and image processing, and the interface specification. (If you want the live code from the listings in this blog post, let me know in the comments below.)

Best of all, there is no additional licensing fee for using these SDKs and tools. You have virtually nothing to lose but your thermal issues and performance bottlenecks.

Accelerate your machine learning networks using TVM and the Adreno OpenCL ML APIs on Adreno GPUs
Always on and Always Connected PCs: Facilitating Applications for Windows 10 on ARM
Heterogeneous Computing: An Architecture and a Technique
Developer of the Month: What Can Machine Learning Bring to Photography? Find out with Nikos Fragoulis of IRIDA Labs
Guest Blog: Oil Rush 3D Strategy Offers Gamers a PC Experience on Mobile