As shown below, a simple for-loop sends 10 million integers through the is_prime API. (The API already has some built-in optimizations such as skipping even numbers and running only through sqrt(n).)

Qualcomm® Snapdragon™ Profiler is ideal for revealing the runtime characteristics of this algorithm: how it affects CPU frequencies, where it gets scheduled in the system, how much CPU capacity it uses.

The Snapdragon 835 mobile platform has 8 CPU cores: 4 LITTLE and 4 big. Maximum frequency is 1.9 GHz on the LITTLE cores and 2.36 GHz on the big cores.

The first two tracks of the display in Snapdragon Profiler show CPU 0 Frequency for the LITTLE cluster and CPU 4 Frequency for big cluster.

As shown above, the algorithm always runs in one core at a time because it’s a sequential for-loop. It starts in core 0 (CPU 0), switches to core 1, returns to core 0, then finishes in core 2.

The algorithm runs almost entirely in the LITTLE core and maxes out its frequency:

Then, notice that the algorithm requires 34 seconds of processing time: 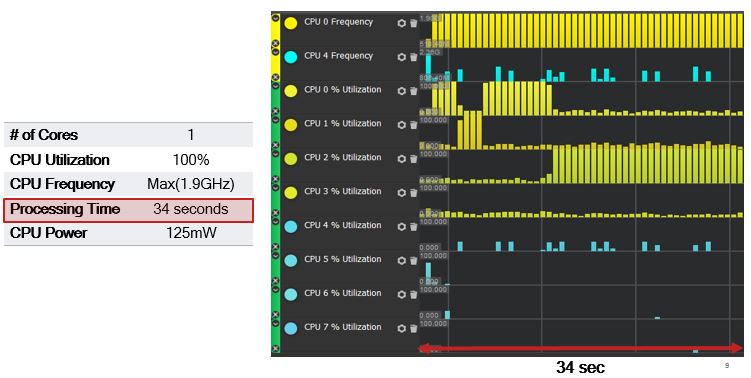 And, as shown on the left, the algorithm consumes 125 mW of power on the CPU.

Those metrics form the baseline for this tutorial.