What are the benefits of the Qualcomm® Snapdragon™ Heterogeneous Compute SDK?

It integrates heterogeneous execution into a concurrent task graph, and removes the burden of managing data transfers and explicit data copies between kernels executing on different devices. At the low level, HetCompute provides cutting-edge algorithms for work stealing and power optimizations that allow it to hide hardware idiosyncrasies allowing for the development of portable applications. In addition, HetCompute is designed to support dynamic mapping to heterogeneous execution units. Moreover, expert programmers can take charge of the execution through a carefully designed system of attributes and directives that provide the runtime system with additional semantic information about the patterns, tasks, and buffers that HetCompute uses as building blocks.

HetCompute embeds the programming model in C++ and provides a C++ library API. C++ is a familiar language for a large number of performance-oriented programmers, thus helping developers pick up the abstractions quickly. C++ embedding also allows incremental development of existing applications because HetCompute interoperates with existing libraries, such as pthreads and OpenGL.

How should I write a HetCompute application?

The designed workﬂow of a HetCompute application from start to completion is as follows: 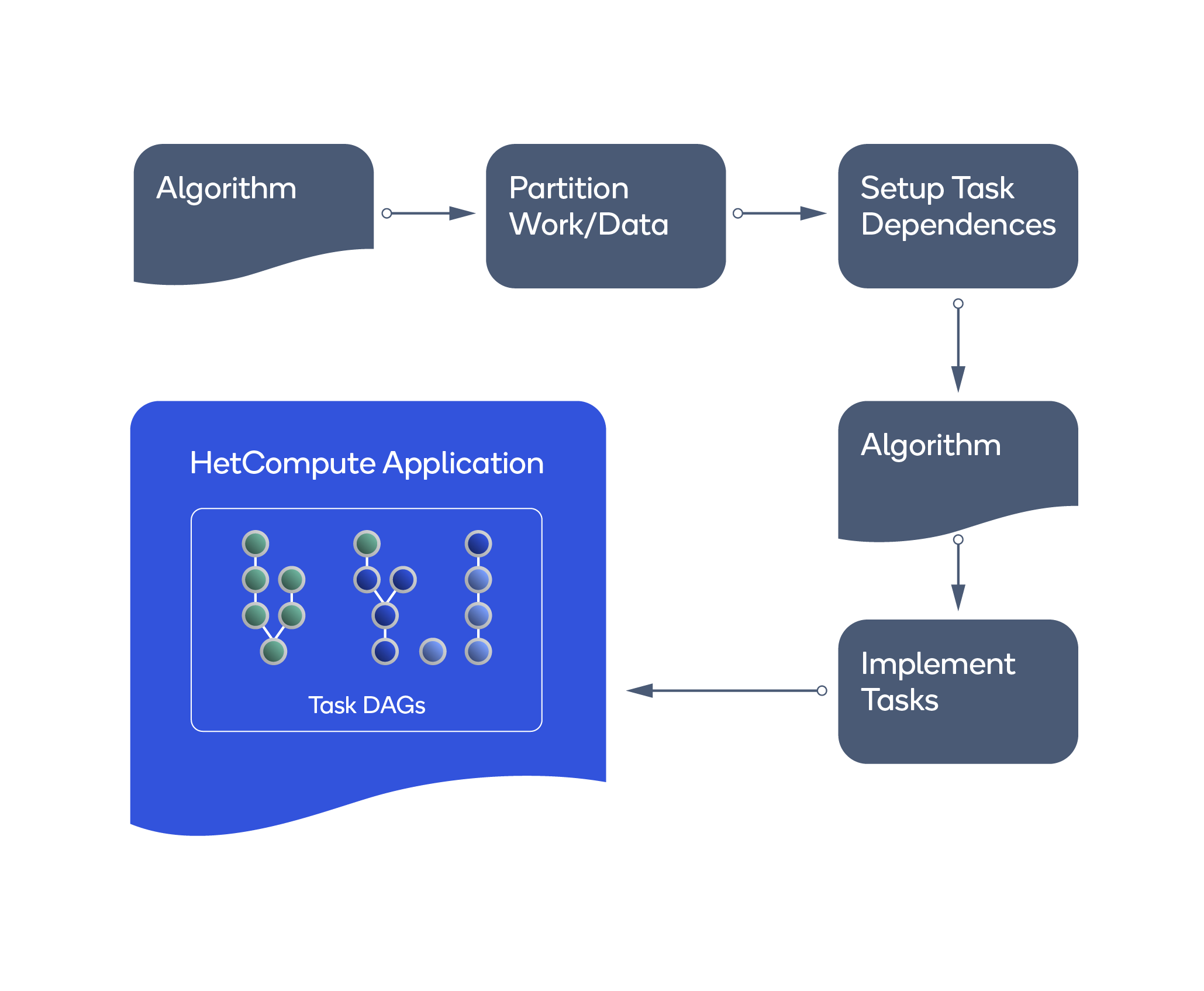 Which parallel algorithms exist in HetCompute?

A fast way to help you build a HetCompute application is by using the HetCompute patterns. These patterns include:

The default pattern implementations should cover the majority of use cases. However, no single implementation is the best ﬁt for all workload types. For that reason, HetCompute offers programmers a collection of commonly used algorithm parameters to serve as the performance tuning knobs (tuner).

How can I chain parallel algorithms together?

The HetCompute Pipeline API allows the programmer to describe a linear chain of processing stages such that the output of each stage is the input of the next. The programmer associates a C++ stage function with each stage, and can specify a basic C++ type or a user-deﬁned data-type for handing over data between stages. Once launched, the Pipeline stage repeatedly executes the stage function over a data stream. A successor stage starts executing on one data unit after its predecessor stage ﬁnishes processing the same unit. While the stages in the pipeline executes one data unit sequentially (from the ﬁrst stage to the last), they can execute different data units at the same time.

What if I want fine grained control of my parallel execution?

HetCompute programmers can partition their applications into independent units of work that can be executed asynchronously in the CPU, the GPU or the Qualcomm® Hexagon™ DSP. These units of work are called tasks.

How can I decide where my task will run?

A HetCompute task contains work that can be executed on any device in a system: the CPU, the GPU, or the Hexagon DSP. HetCompute tasks use kernels to achieve this computational heterogeneity. A kernel contains the computation, that is, the actual device code, a task executes. This could be CPU code, GPU code, or Hexagon DSP code, resulting in three different types of kernels.

The afﬁnity APIs allow the programmer to change execution properties of program statements (arbitrary functions), HetCompute tasks, and device threads. These properties include:

What is the difference between the Qualcomm Symphony SDK and the Snapdragon Heterogeneous Compute SDK?

What are the System requirements?

Qualcomm Snapdragon and Qualcomm Hexagon are products of Qualcomm Technologies, Inc. and/or its subsidiaries.