This project introduces you to Moddable SDK development in JavaScript on the QCA4020 System-On-Chip (SoC) Product Development Kit. The Moddable SDK is a combination of development tools and runtime software to create applications for embedded devices. The QCA4020 IoT solution offers Wi-Fi, Bluetooth low energy (BLE), and 802.15.4 capable radios in a single-chip package. In this project, we cover Linux host environment setup and verify the setup by building, flashing and running the Moddable SDK helloworld JavaScript example app on the QCA4020/CDB. The helloworld example app connects to the Moddable xsbug JavaScript source-level debugger and traces the string Hello, world - sample to the debugger console.

Setting up a new development environment can be challenging. Usually, the first development goal is to compile and debug a simple helloworld application. 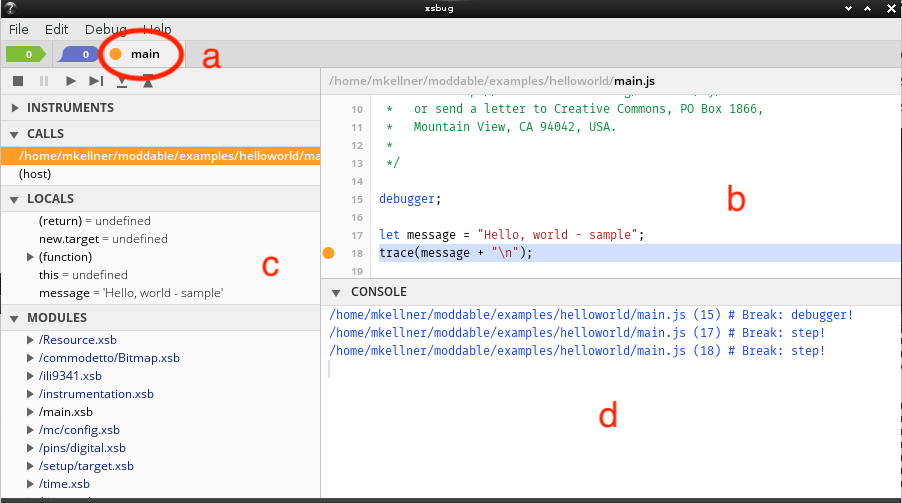 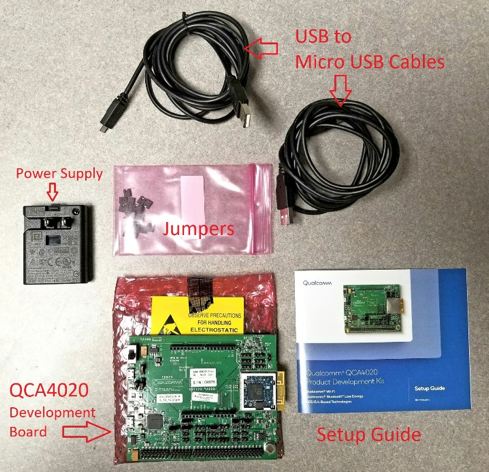 The contents of the QCA4020 Development kit, as seen above, include:

Follow the one-time setup instructions in the Moddable SDK Getting started with QCA4020 development document to complete the following steps:

We will discuss specfic details on some of the steps above, then build the helloworld example app. Follow the Moddable setup instructions along with the explanation below.

First we set up a qualcomm/ directory in your HOME directory. This directory will contain the Qualcomm SDK, FreeRTOS and QuRT.

Then we set some environment variables, download and build support libraries, and install the OpenOCD tool for debugging.

There are a number of downloads and steps involved. Follow the instructions in the Getting started with QCA4020 development document closely.

The Moddable runtime uses FreeRTOS with a microsecond clock. The clock is configured with configTICK_RATE_HZ in FreeRTOSConfig.h. In the same file, we also configure the size of the heap with configTOTAL_HEAP_SIZE.

Two other defines: configCHECK_FOR_STACK_OVERFLOW and configUSE_MALLOC_FAILED_HOOK are setup to assist in debugging.

The modifications are in the file $MODDABLE/build/devices/qca4020/xsProj/src/export/DevCfg_master_devcfg_out_cdb.xml.

In the same file, DEP (data execution prevention) is disabled to allow more RAM to be allocated to applications.

The QCA4020 link map is modified to specify where the different components of your application will be located in RAM and flash. Moddable apps have their resources, application native code, bytecode and static variables stored in flash. Application code can also run out of execute-in-place (XIP) memory.

The link map is located in the file ~/qualcomm/qca4020/target/bin/cortex-m4/freertos/DefaultTemplateLinkerScript.ld.

In this file, we set RTOS_HEAP_SIZE to match the FreeRTOS value configTOTAL_HEAP_SIZE, move static data to Flash, and adjust the read-only vs. RAM data space.

Building and Debugging an Application

In this section we learn how to build, install and debug the Moddable helloworld example app on the QCA4020 CDB. This will pave the path to further development and demonstrate the development workflow.

After the one-time environment setup and Moddable tools are built, the workflow proceeds as follows:

Use at least three console windows. One for building project source, one for building the launcher application and debugging with gdb, and one to start xsbug. 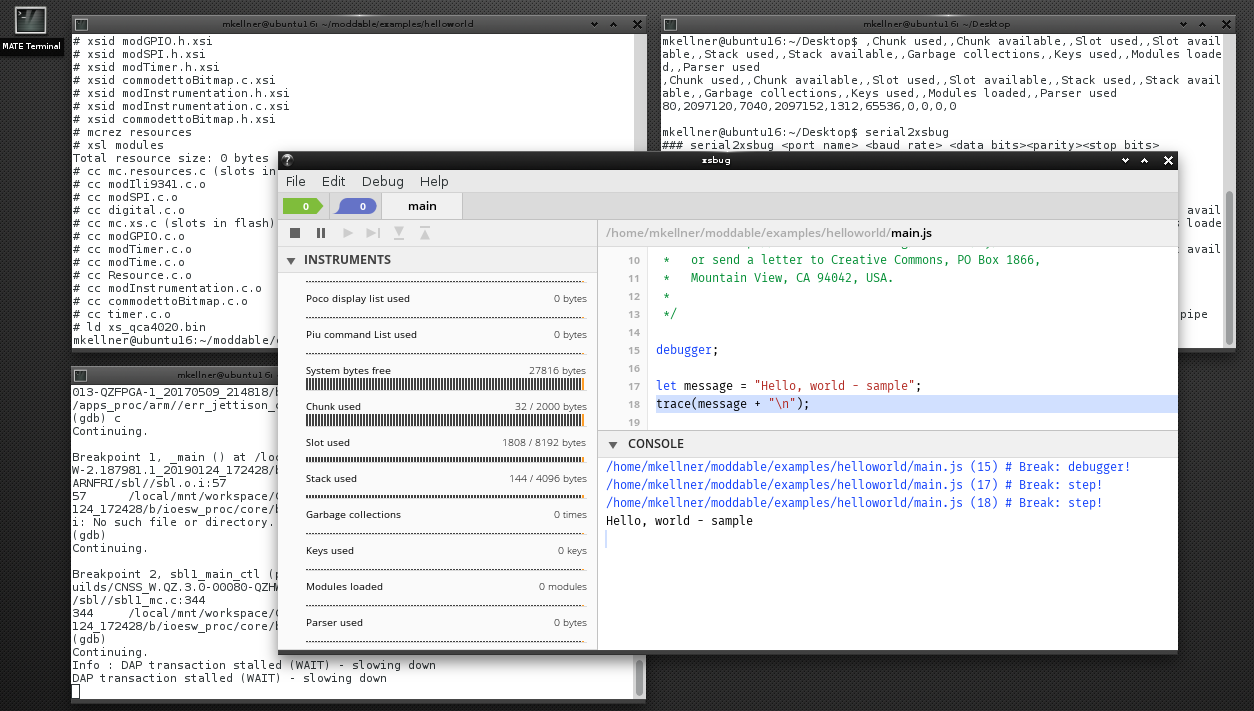 A Moddable app contains the JavaScript bytecode of your application, the XS JavaScript runtime, and compiled resources for your app.

The mcconfig tool builds the Moddable XS runtime, application, modules, and compiles assets into an archive that will be included in the final build. It uses the manifest.json file to define which components and resources to include in your app and how to build it. See the Manifest document for details about the manifest.json file.

Open another terminal window. In this window, we will navigate to the launcher application's build directory and build the QCA4020 application. We will continue to use this directory to flash and debug the application.

The APP_NAME environment variable specifies which xs_qca4020.a archive to link to: $MODDABLE/build/bin/qca4020/cdb/debug/APP_NAME/xs_qca4020.a

The $MODDABLE/build/devices/qca4020/xsProj directory is derivative of the QCA4020 sample applications and has a similar structure to the examples in the QCA4020 SDK.

Flash the application to the device

In the same terminal window, we'll load the application to the QCA4020.

Use gdb and xsbug to debug your application

Open another terminal window. In this window, we will launch xsbug, the Moddable SDK JavaScript source-level debugger that was built as part of the Moddable SDK setup described above. We will also start the serial2xsbug tool that bridges communication between the QCA4020's serial port and the host TCP/IP port that xsbug uses.

Note that all Moddable applications are built and run following the same basic steps outlined above.

See QCA4020 Modern UI Application Development with the Moddable SDK for an in-depth explanation of the weather example app, a JavaScript app from the Moddable SDK that issues HTTP requests to the OpenWeatherMap REST API and displays the weather forecast for various U.S. cities on a color 240 x 320 LCD.

Congratulations! By following the steps outlined in this project, you've successfully built, deployed and run a basic JavaScript app on the QCA4020/CDB that connects to the Moddable SDK xsbug source-level JavaScript debugger. We look forward to hearing about applications you built with the Moddable SDK. We're available to help with design, implementation, training, and support.