This project attempts to build Android TV on the DragonBoard™ 410c from Arrow Electronics. The main objective was to utilize the Android TV Input Framework, and this was done by running the built-in reference LiveTv App and Sample Input Apps.

To start, we used the Reference LiveTv App built for ARM64 as a TV App and the Sample Input apk for the TV Input. The Sample Input allows the user to configure the Channels in two different ways:

We have also implemented the Custom Launcher to provide the look and feel of the TV Launcher and integrated the IR Sensor onto DragonBoard 410c for controlling TV Activities with Universal Remote.

Dependencies:
An Exo player is built and installed in order to play the videos.

It is very interesting to know that we can watch Live TV on a small form factor device like DragonBoard 410c. Also, TV Input Framework is a Robust framework which provides many features with multiple Input methods.

Setup for Android TV with the DragonBoard™ 410c 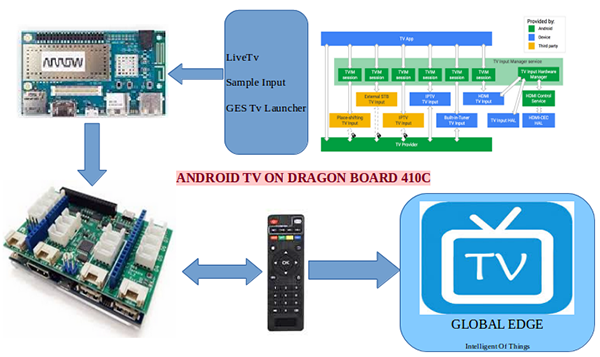