What is secure boot?

The boot path is a preferred attack vector. It is difficult to guard against attacks there because anti-malware can be disabled by malicious code that prevents it from loading entirely.

Secure boot is designed to protect the system against malicious code being loaded and executed early in the boot process, before firmware is loaded. In secure boot, OS boot images and code are authenticated against the hardware before they are used in the boot process. The hardware is set up beforehand in a way that it authenticates only the code generated using security credentials you trust. Secure boot ensures that the boot image and firmware are as the manufacturer intended and have not being altered by malware or bad actors. 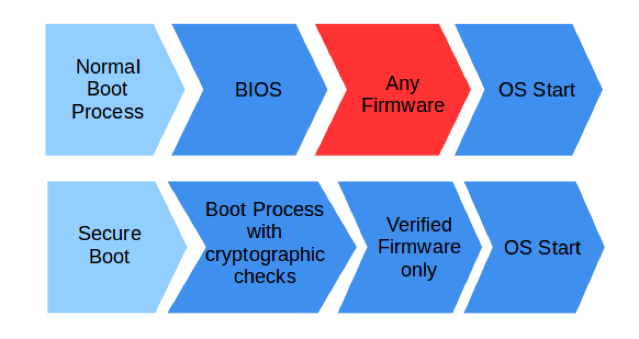 The difference between a normal boot process and secure boot

Enabling secure boot on the QCA402x board

In secure boot, keys are generated from your SSL certificate, hashed and burned into the CPU in a One Time Programmable (OTP) process. Once a key has been burned into the processor, it cannot be changed.

In the code snippet below, we use the development profile: