If you told your boss, “I want to buy a new mobile development platform so we can see how fast our app runs,” how do you think that would go over? (Think: lead balloon.) 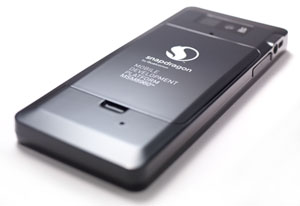 You’ll probably get to “yes” more quickly if you tell your boss, “I want to buy a new mobile development platform, because we can get early access to the Snapdragon™ S4 processor. There are over 120 designs from OEMs in development using the S4 and we can have our app optimized before those devices launch later this year.”

Go talk to your boss then, because Bsquare has just released the Snapdragon™ S4 MSM8960-based Mobile Development Platform/Smartphone (MDP/S), based on the Snapdragon S4 processor by Qualcomm.

This latest MDP/S is an upgrade to the Snapdragon S3 MSM8660 Mobile Development Platform (MDP) that was made available to the developer community last year. You don’t like to wait for devices, and the MSM8660-based MDP gave you the inside track on app development for the Snapdragon S3 processor. In fact, many of you who bought it when it came out in April had your apps written, tested and optimized by the time commercial devices appeared that summer.

Get the first MDP with a Snapdragon S4 processor.

What’s inside the Snapdragon S4 processor?

Let’s start with its new CPU core. The dual-core Snapdragon S4 configuration in the MSM8960 MDP/S has a smaller footprint, better thermal profile and up to 60% higher performance than the CPU core in the Snapdragon S3 processor. The Snapdragon S4 is the first Qualcomm processor designed in 28nm process, and it uses asynchronous symmetric multiprocessing (aSMP) to run each CPU core at its own independent clock and voltage, depending on workload.

The MSM8960 also includes the new Adreno™ 225 GPU with graphics acceleration for UI, browsers, games and navigation. Our programmable Hexagon DSP makes its first appearance in both the modem and multimedia subsystems, efficiently offloading entire software-on-CPU tasks to hardware.

And for connectivity, the MSM8960 features the industry’s first fully integrated LTE world mode/multimode modem, with full support for 4G/3G WWAN interfaces, including LTE, CDMA, GSM and UMTS. The MSM8960 combines the modem and application processor on a single chip for handsets, tablets and other consumer devices, just like the ones for which you’re developing apps.

We knew you’d want to get your hands on the latest Snapdragon processor in a mobile development platform before commercial devices are available, so we’re glad to pass Bsquare’s news about the MSM8960-based MDP/S on to you.

This MDP makes it easy for you to create, test and optimize your apps for the Snapdragon S4 processor. That gives you three big advantages:

Are you at the Game Developers Conference (GDC) this week in San Francisco? Keep an eye out for Bsquare and ask about these other advantages of the MSM8960-based MDP/S:

Why wait? Start developing. You’ll find us running tutorials at GDC this week, so come by and let me know what you want to do with the Snapdragon S4 processor.

Leon is a senior product manager at Qualcomm CDMA Technologies (QCT), where he is responsible for Snapdragon Mobile Development Platforms.