You want to develop native C/C++ Android apps using the Android NDK, but you also want to work in Visual Studio where you’re comfortable, right?

Up to now, most developers have had to learn a new environment like Eclipse, then transfer their code to it and start work on their Android apps. It’s a pretty arduous transition, and not really the best initiation you could have to the world of mobile app development.

But starting now, if you have Android projects that you’d like to develop in Visual Studio 2012/2013, we’ve got you covered.

I posted about Snapdragon Debugger for Visual Studio a couple of months ago, just before we demonstrated it at GDC. You can use it to debug various APIs on Snapdragon-powered devices running Android 4.4 and up.

We’ve had a lot of requests from developer partners for a plugin that would allow them to debug Snapdragon APIs from directly within Visual Studio. We’ve built the plugin to satisfy those requests and to ease the transition to mobile app development for those of you accustomed to Visual Studio.

Snapdragon Debugger for Visual Studio lets you see what’s happening in real time as your application runs on an Android smartphone or tablet plugged into the USB port of your PC. The immediate interaction can help you shave hours or days off of your development time, as opposed to going through dozens of debug-compile-sideload-run loops. 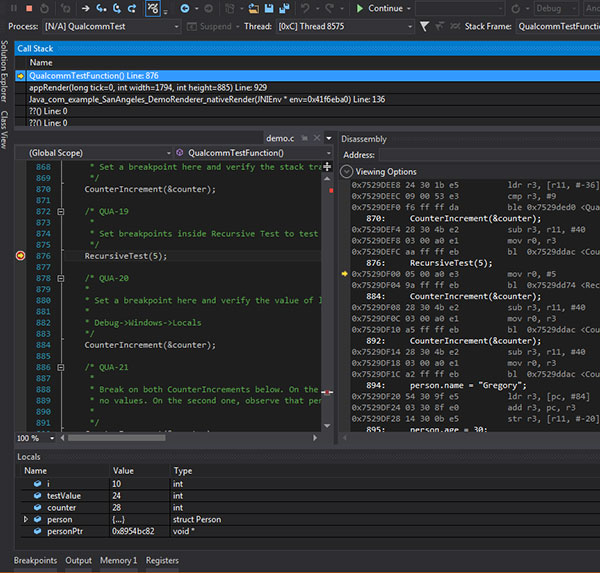 Even if you’re not developing specifically for devices running the Snapdragon processor you can still use Snapdragon Debugger for Visual Studio. It works with any commercial device running Android 4.4 or higher, regardless of chipset, and is compatible with Visual Studio 2012 and 2013.

Features of the Snapdragon Debugger for Visual Studio include:

Ready to start working on Android apps from Visual Studio?
Download and install Snapdragon Debugger for Visual Studio, available at no charge to registered QDN developers.

The video below walks you through creating, building and launching a native C/C++ Android app using Snapdragon Debugger for Visual Studio. By the end, you will have an app running on your Android device that is paused at a break point for you to debug.