Thread is an emerging IoT protocol designed to meet the interoperability, security, power, and architectural challenges for connected homes and commercial building applications and is available in Qualcomm® QCA402x developer kits. In this blog we’ll take an introductory look at who’s behind Thread and how it works. We’ll also look at who’s supporting Thread, and how you can get started with it.

Where Did Thread Come From?

Thread was initially designed by Google-owned Nest (along with Arm, Big Ass Solutions, Freescale/NXP, Samsung, Silicon Labs, and Assa Abloy/Yale) as a way to easily connect and manage multiple low-power devices using a standard IP network. In 2016 Google decided to open source OpenThread. Their mission is to advance the adoption of connected home products and make these technologies fully compatible. Since then, over 100 prominent companies have become members of Thread Group.

What Exactly Is Thread?

Thread is a wireless protocol that allows you to create an interconnected network of many devices that seamlessly communicate with each other using minimal power. How does Thread accomplish this? In the simplest terms, the Thread stack is an open standard, built according to the existing Institute for Electrical and Electronics Engineers (IEEE) and Internet Engineering Task Force (IETF) standards to help ensure device interoperability and low-cost bridging to other IP networks. It is fully IPv6 compliant so there is no need for translators or gateways to convert IP-packets to proprietary protocols. It uses 6LoWPAN as its foundation to compress data packets to reduce energy consumption and optimize packet forwarding. It uses low-power mesh networking technology which means devices can receive and pass along data, which results in a very stable network with a large reach.

These technologies, along with a certification program that validates device conformance to the specification, make Thread a protocol worth investigating if you’re a developing IoT applications in this space. 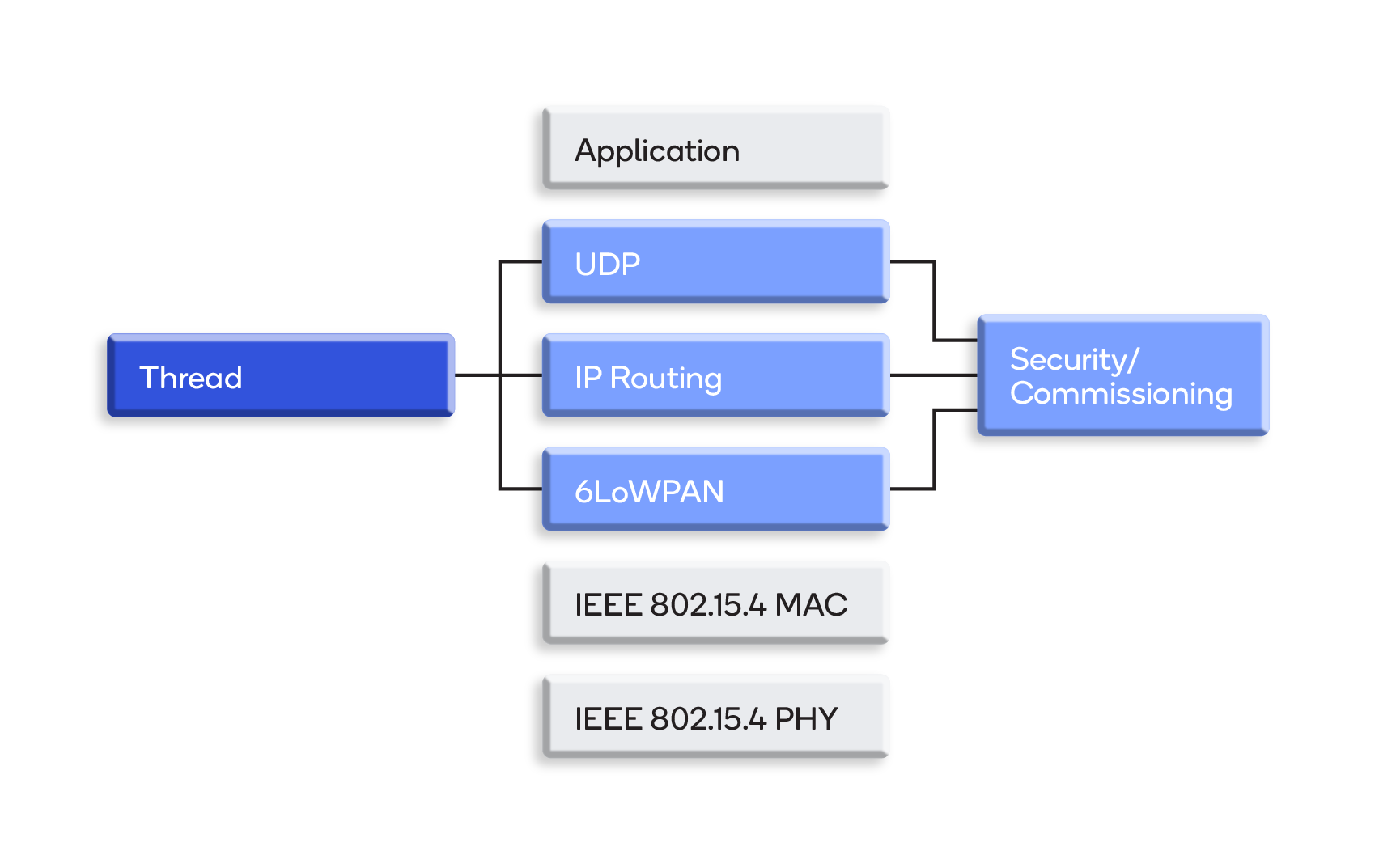 Figure 1. Overview of the Thread Stack

Some of the key characteristics of the Thread stack include:

In 2017, Version 1.1 of Thread was released. It was created to easily connect and control products in the home with an architecture suited for residential use. 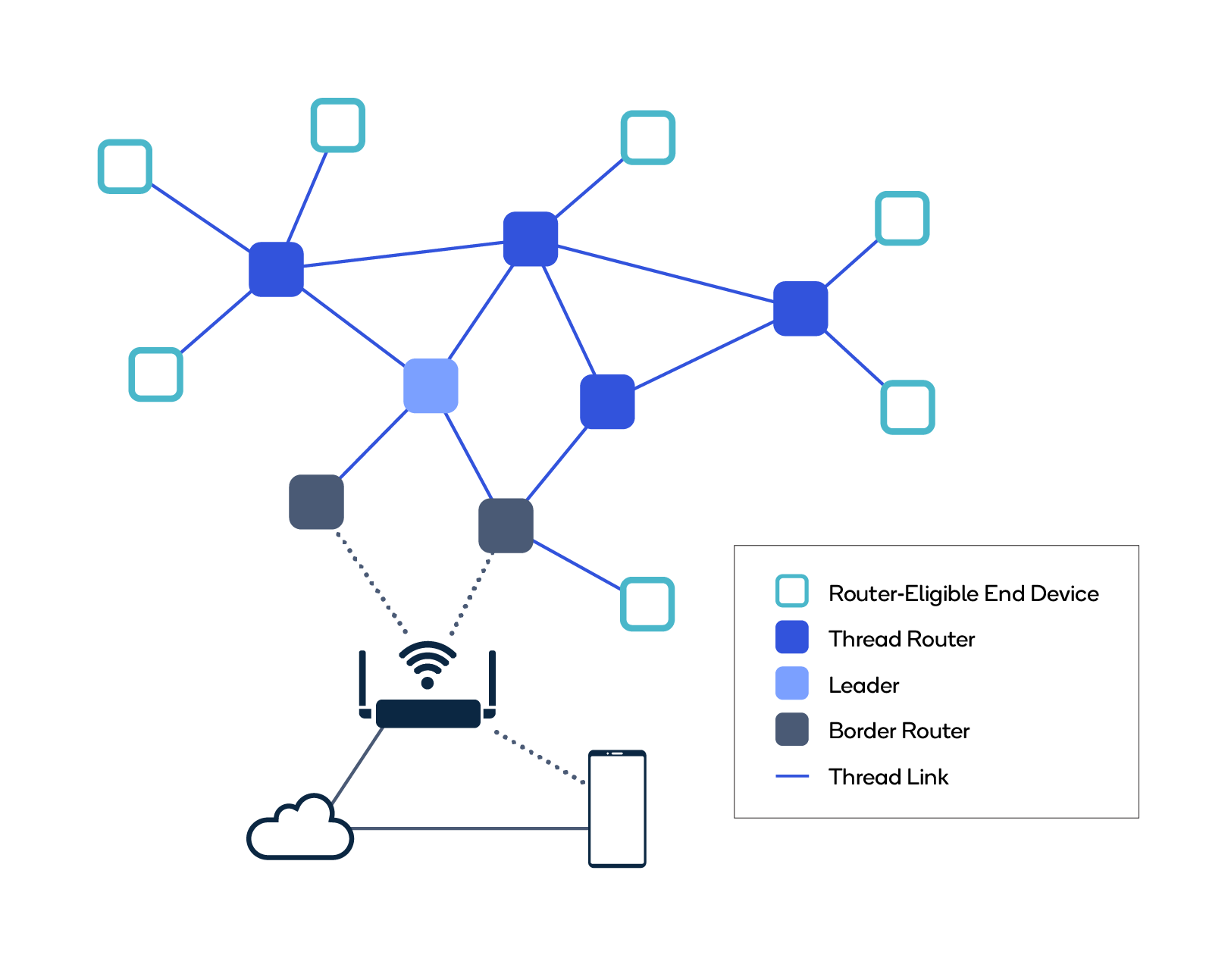 The device types and functions that make up the initial standard residential architecture are:

Thread 1.1 was designed to support hundreds of nodes in a single mesh network. Practical deployments have met that goal and an order of magnitude beyond. While Thread 1.1 addresses the needs of consumer and some commercial environments, many commercial environments typically desire larger scale while scoping security concerns. In June of 2019, Thread 1.2 draft specification was announced and released to membership with the ability of composing large numbers of Thread networks into a single cohesive IPv6 subnet while limiting the scope of Thread security credentials to a single or small subset of Thread networks. 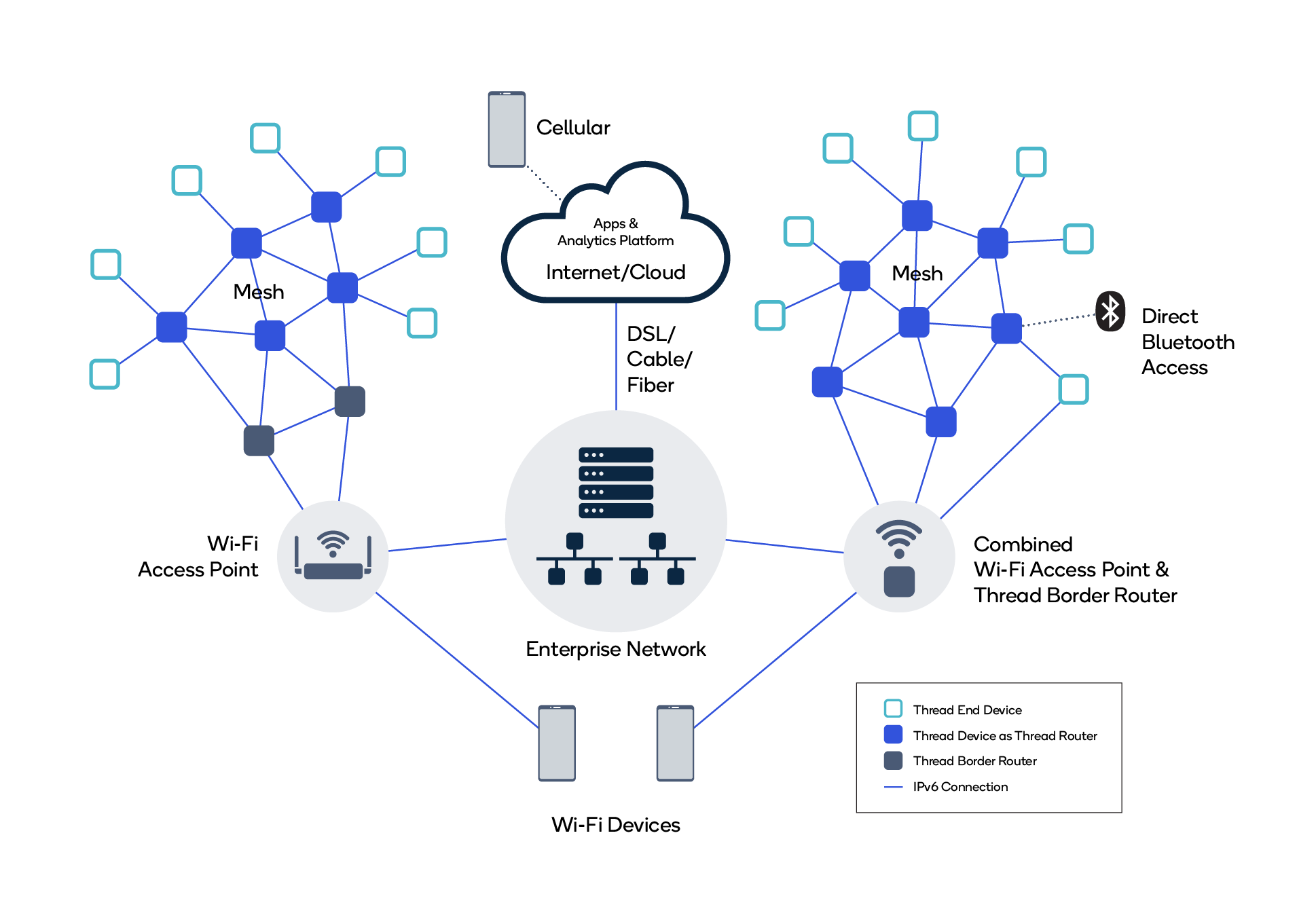 A few significant enhancements in Thread 1.2 that support a commercial architecture are:

For more details on all of the enhancements in Thread 1.2, you can download the Thread 1.2 Base Features White Paper.

Where Can You Get More Information on Thread?

Another reason Thread is gaining prominence is that, it is written to work with existing IP technologies, and the vast amount of technology and knowledge built around today’s networks. This means that as developers, you don’t need to learn an entirely new way of doing things to get started.

For more ideas on how Thread is being used in everything from making entire buildings adapt to employee movement, to monitoring animal behavior 24/7 anywhere on the farm, have a look at these case studies.

If you’re actually ready to dig in and give it a try, there is a wealth of information on the Thread Group’s getting started page for developers. You can also check out our developer kits for QCA4020 and QCA4024, and be sure to tell us about your project! Remember, we are always here to help.

Qualcomm QCA402x is a product of Qualcomm Technologies, Inc. and/or its subsidiaries.