With all the work you’ve put into making your extended reality (XR) projects in Unity as immersive as you can, don’t you want audio that keeps up? After all, your users’ eyes are basking in six degrees of freedom (6DoF); shouldn’t their ears get the same thrill? The game looks different when they turn their head or move their eyes, and it should sound different, too.

We’ve just released the Qualcomm® 3D Audio Plugin for Unity, a binaural, spatial audio plugin you can use in creating XR (including AR and VR) experiences and games. The plugin makes it as easy as possible for you to add lifelike audio to lifelike video playing in VR headsets, so that sound objects follow your users the way they do in the real world. And, if those headsets are powered by the Snapdragon® 835 or Snapdragon 845 mobile processor, you can offload work from the CPU to the DSP for battery savings.

How can you build cooler XR with the Qualcomm 3D Audio Plugin for Unity?
Whether you’re starting a new XR project or you want to convert hundreds of monaural sounds to spatial ones in an existing project, the plugin makes its audio features available to you right in the Unity interface. 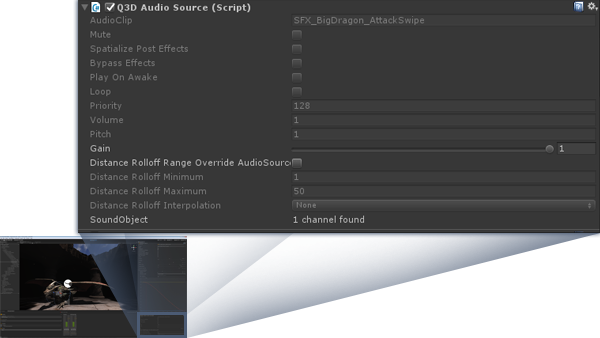 Those features add up to a credible audio experience that matches the visual experience in your XR games and apps.

A big part of Unity’s success, of course, has been its model of allowing you to develop your game once using a Windows, macOS or Linux workstation, then to deploy for platforms as varied as PS4, Xbox 360, Android and more. In keeping with that model, you can maintain a single Unity project when you use the 3D Audio Plugin; there’s no need to maintain separate versions of your project, with and without the plugin. On unsupported platforms you can disable the plugin; it consumes a negligible amount of resources when disabled.

In a large project with hundreds of sounds, adding features like spatialized audio, reverb and Ambisonic soundfields would require a lot of manual conversion work. You could automate that work, but automation would entail yet another development effort. The 3D Audio Plugin converts any number of audio sources in an existing project, even if the project was not intended for use in VR or with spatialized audio. You use the plugin to create a Q3DAudioGlobalSettings object, which can automatically detect audio sources that have mono audio clips, then convert them to 3D Audio sound objects.

At build-time you have the option of running on the Arm CPU or offloading to the DSP. That means you don’t need to take our word for the battery savings from the DSP; you can build your project both ways and decide for yourself where it runs better.

Have you started developing with the Qualcomm 3D Audio Tools suite? If so, you’ll be glad to know that we’ve created the plugin in conjunction with version 2.0 of that suite, and that we align our audio software releases to VR headset and chipset releases.

Next Steps
The way you design sound in your projects is an important part of making credible, lifelike, 6DoF experiences and games, so spatialized audio can be a big differentiator in your XR development.

The Qualcomm 3D Audio Plugin for Unity is available now upon request from the Qualcomm Developer Network. I think you’ll find it offers better workflow in Unity than Daydream does, with a strong boost to performance on Snapdragon 835 and Snapdragon 845.

Look for us at Mobile World Congress and Game Developer Conference. We’ll be on hand to tell you more about using the plugin to make audio as immersive as video in your XR and game projects.