Have you made your plans for the Game Developers Conference (GDC) next week in San Francisco? We’ll be there to demonstrate the new Qualcom® Snapdragon™ Debugger for Visual Studio v1.0 and updates to two more tools, Adreno™ SDK v3.9 and Adreno Profiler v 4.0, all from Qualcomm Technologies Inc. (QTI).

Here’s a look at what’s new in each of them.

The newest tool is Snapdragon Debugger for Visual Studio v1.0, a Visual Studio-based Android NDK Debugger. It’s designed to help ease the transition for developers coming from console and PC game development into the world of building games for mobile.

The Snapdragon Debugger will be released on Qualcomm Developer Network shortly after GDC. Stop by and see how it can help you write code for Android apps in Visual Studio.

Adreno is the graphics processing unit integrated with Snapdragon processors. It has its own SDK, which QTI has updated for all you shader enthusiasts and compute developers.

First, the Adreno SDK now supports OpenGL ES 3.1 and the Android Extension Pack with new code and an updated desktop emulator. That means that the SDK now covers OpenGL ES 2.0, 3.0 and 3.1, plus AEP DirectX, with tools, documentation and tutorials. You’ll find samples of the code we used in the Palazzo demo, based on Unreal Engine 4, that showcases content developed with APIs including OpenGL ES 3.1 and the Android Extension Pack (see screenshot below). 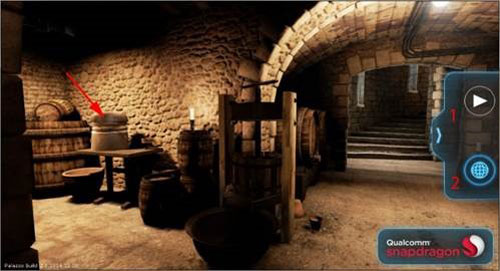 Graphics like these allow you to build strong differentiation into your games, and the emulator can help you shorten the trial-and-error cycle of graphics development by seeing what you’ve developed without constantly iterating between PC and device.

For compute developers, the SDK includes an update to the on-device Snapdragon OpenCL Debugger to support Android L (5.0 Lollipop) in Eclipse. You can add break points, solve functional issues and debug code running on both the Adreno GPU and Krait™ CPU of a device powered by Snapdragon connected via USB (see screenshot below). 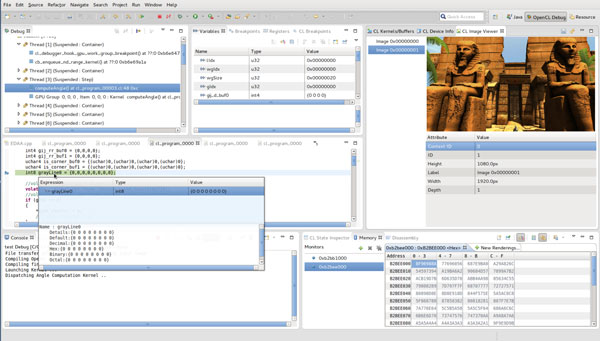 An Adreno OpenGL ES Developer Guide is available in the Adreno SDK as well as a separate downloadable file. It specifically covers the 4xx family of the Adreno GPU, which is shipping in the Nexus 6 (Snapdragon 800 with Adreno 420 GPU), and LG G3 (Korea) and Xiaomi Mi Note Pro (Snapdragon 810 with Adreno 430). 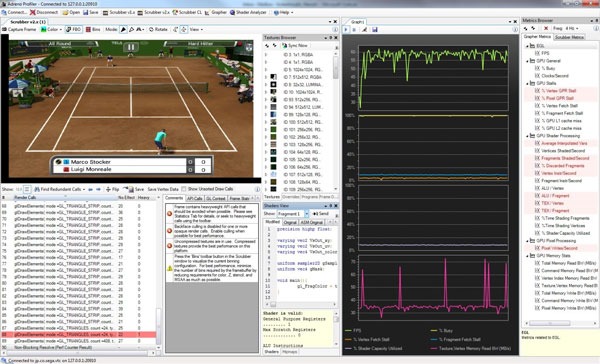 As if those three tools weren’t enough, QTI is releasing version 6.0 of Trepn Profiler, an on-device app for measuring power consumption and performance. Trepn is designed so you can profile your entire device or a single app. It displays cellular and Wi-Fi network usage, and on supported devices it shows battery power and CPU/GPU frequency and utilization.

In version 6.0, Trepn has a preset-driven interface inspired by Android L, making it easier to access the most frequently used parts of the app like mobile data monitoring and CPU usage monitoring, as shown in the screenshot below. 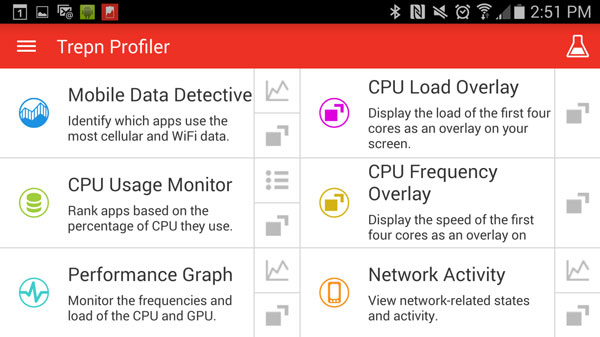 The UI offers one-click profiling and home screen shortcuts, and all screens rotate between portrait and landscape mode, with corresponding layouts. You don’t have to be a developer to use and like Trepn Profiler; it shows plenty of data that is useful to normal mobile users as well. In fact, we plan to make the tool available through both Qualcomm Developer Network and Google Play, coming in April.

Plan to stop by booth 612 at GDC next week and have a look at the tools we’ll be showing. Meanwhile, download the Adreno SDK and Adreno Profiler now and see how they complement your development process.

Mixed Reality Developers Get More Tools and Resources – Nreal Ups Its Game
Working from Home? Take Time to Upskill
Heterogeneous Computing for your Demanding Apps
The Rise of Mobile eSports and the Influence of Snapdragon Elite Gaming and 5G
Developing 3D Graphics with Vulkan on Mobile