There’s some great news for IoT manufacturers and developers considering building cellular-enabled IoT devices. Microsoft Azure is now pre-integrated with the Qualcomm® LTE IoT Software Development Kit (SDK) from Qualcomm Technologies, Inc. Announced in February, the LTE IoT SDK is designed to allow developers and manufacturers to utilize the processing capabilities of the Qualcomm MDM9206 LTE IoT global multimode cellular modem. Not only will developers be able to access the power of the application processor, local and wide-area wireless connectivity, global navigation satellite system (GNSS) capabilities and peripheral interfaces integrated in the MDM9206 LTE IoT modem, but they now have the choice of connecting to Microsoft Azure IoT cloud services by downloading and embedding the Microsoft Azure IoT Hub C SDK. IoT solution providers now have access to a broad selection of Azure IoT ready LTE cellular module providers. The LTE IoT SDK is engineered to eliminate the need for – and the additional cost of – an external applications processor. This can help reduce cost and time to build Azure IoT based products. The LTE IoT SDK is designed to support developers while they run custom software on the powerful integrated 1.3 GHz Cortex A7 CPU within the MDM9206 LTE IoT modem. 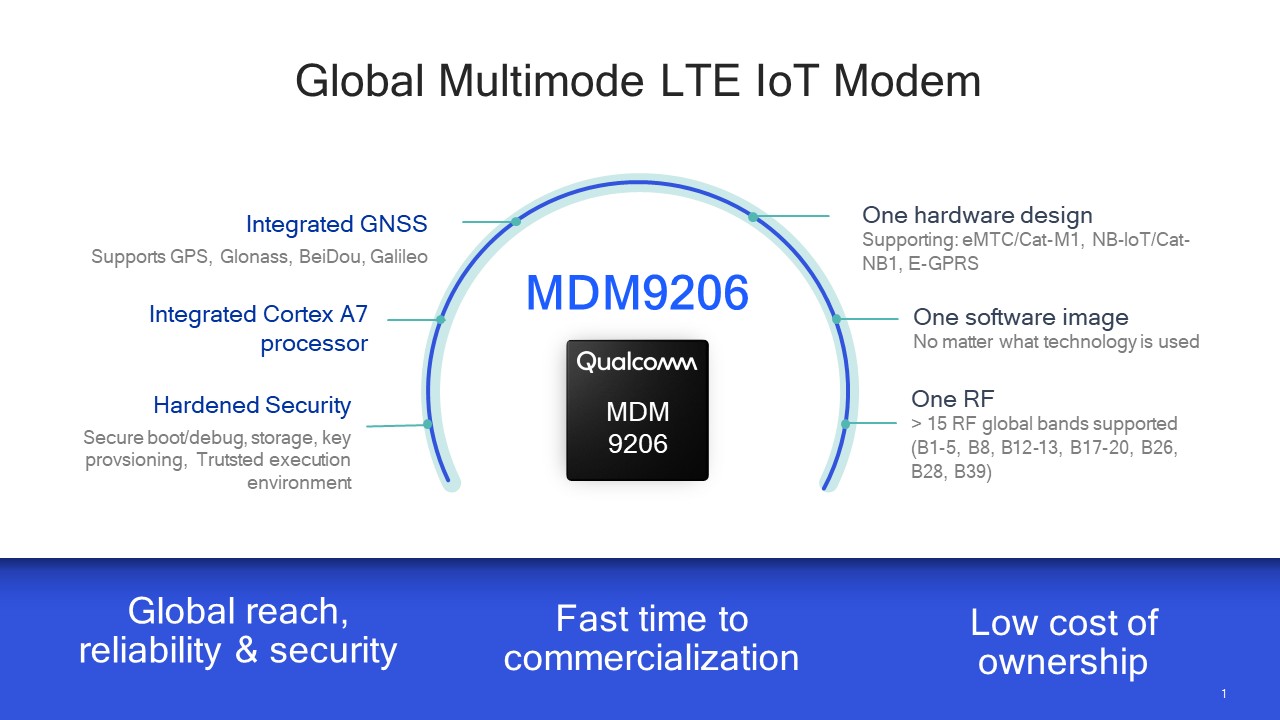 The LTE IoT SDK for the MDM9206 is designed to facilitate the development of cost-effective, low-power devices that feature multi-year battery life and greater coverage compared to traditional LTE modems. Already, more than 90 designs are using the MDM9206 LTE IoT modem with global multimode support for eMTC (Cat M1), NB-IoT (Cat NB-1) and 2G/E-GPRS. The LTE IoT SDK exposes an extensive list of platform capabilities of the MDM9206 through a simple application interface(QAPI).

The Qualcomm LTE IoT SDK makes application development very straightforward. Developers install the SDK on a development PC, build the application, load it on the LTE IoT development board, launch the app and connect to the cloud for testing. SDK tools include:

The MDM9206 LTE IoT modem, the LTE IoT SDK and Qualcomm Technologies’ set of trusted wireless edge services for enterprise and IoT cloud providers (previously announced) are part of the company’s comprehensive work to address key challenges within the IoT space. News of pre-integrated support for Microsoft Azure is a significant milestone for cellular based IoT development and Microsoft Azure developers. The list of other cloud platforms supported in the Qualcomm LTE IoT SDK – which, in addition to Azure,– are:

The LTE IoT SDK for the MDM9206 modem were demonstrated at MWC Shanghai June 27-29. For more information, please visit qualcomm.com/lte-iot.

Human-to-Human Communication with Flexible Audio Technology
Neural Network Optimization with AIMET
5G, 8K video, up to 7 cameras and 15 TOPS of processing on a drone
Introduction to Open RAN