Today’s IoT devices pack a ton of functionality, so it’s easy to overlook their smallest components. Among those are sensors, which serve as tiny building blocks for Ambient Computing, that acquire and convert measurements of the real world into digital data. Most developers are aware of common sensors such as the accelerometer and gyroscope found in smartphones. However, sensors have been used in industrial applications for decades, and have recently gained prominence with the growth in IoT and Industrial IoT (IIoT).

Since developers have been integrating sensors with Qualcomm Technologies solutions through mechanisms like our Qualcomm® Hexagon™ DSP, we thought it would be beneficial to discuss the different types and categories of sensors available, how sensors work, and considerations when choosing them. AMR expects the global opportunity for sensors to reach $241B by 2022, so it’s definitely an area to stay on top of.

Where the Real World Meets the Digital World

As you start to work with sensors, it’s important to note the definition of a sensor, and that the classification of sensors by different developers, can vary. A sensor can be the tiny component itself, or a combination of sensors that collectively provide data. For example, a solution packaged with sensor components, a microcontroller, and connectivity, could be called a “sensor” or an “intelligent sensor”. Even technologies such as smartphones and drones are sometimes referred to as sensors.

As you can see, there are many different types of sensors, and they can vary in size and function. The table below identifies some of the most common sensors used in Ambient Computing solutions like smartphones, VR headsets, wearables, and IoT. 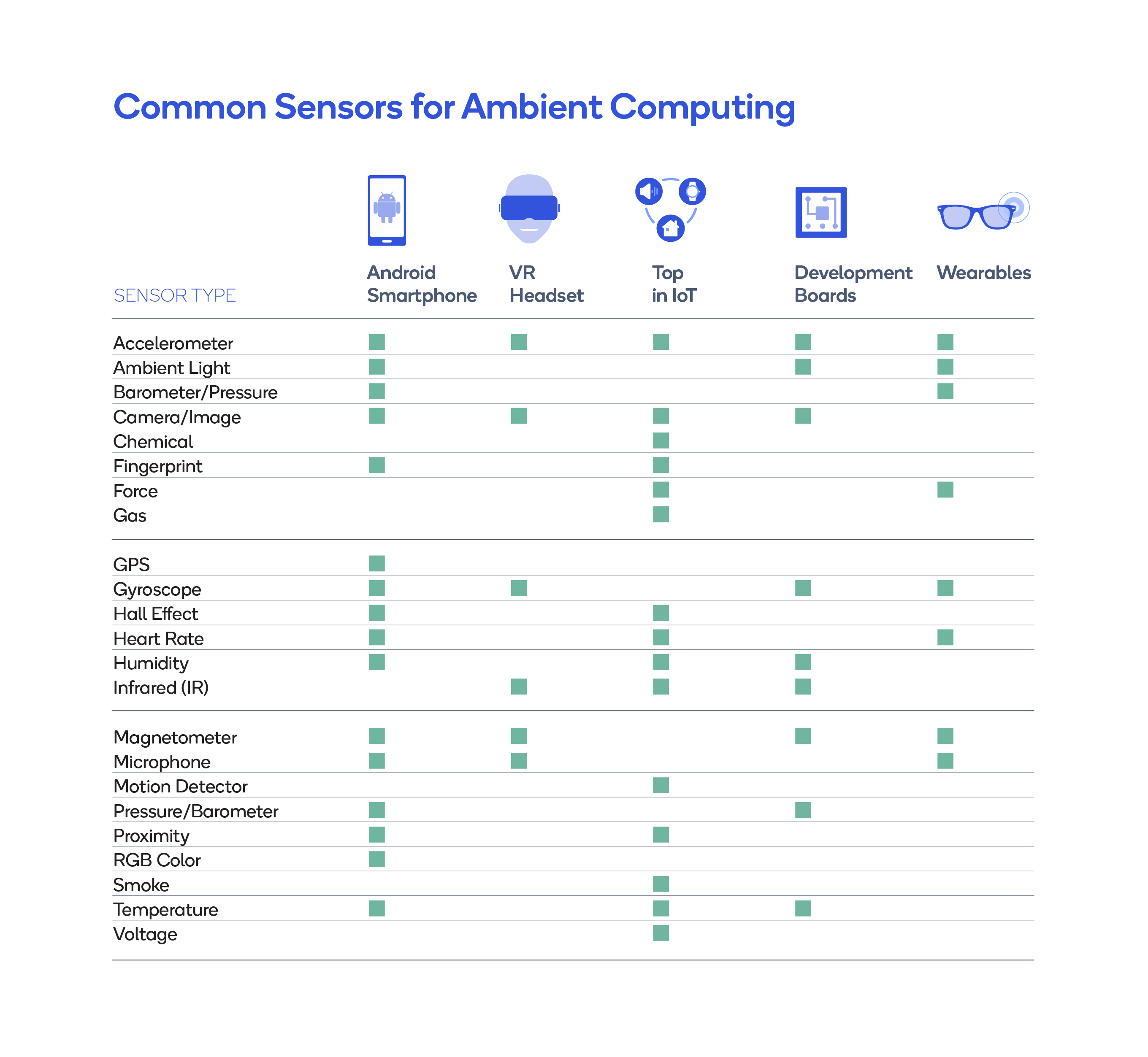 The Design of the Sensor Matters

Sensor designs vary widely, and there are usually multiple techniques to measure a certain phenomenon.

Take for example, an accelerometer. One technique to measure acceleration is to track the piezoelectric effect that occurs when microscopic crystals generate a voltage from the stress caused by accelerative forces. An alternative approach is to measure differences in capacitance that occur when forces are applied between microstructures.

Another example is a temperature sensor. One such design uses a thermocouple in which two dissimilar metals are joined at two ends, where one end is used to take the measurement. When the temperature at the two ends differs, a voltage is created. A completely different design involves a resistance thermometer detector (RTD) such as wire-wound film. Here, an electrical current is applied across the RTD causing a change in the resistance level that corresponds to a temperature.

Sensors may be hardwired to another part of a system or may be wireless. In the latter case they may be combined with other digital circuitry to send their measurements over the air and may contain their own power source. A sensor may be a simple standalone measuring device that must be connected to other digital hardware, such as an integrated circuit, to consume the measurement. Or, it may be combined with the digital hardware during manufacturing to form a single package.

Sensors and other micro devices can be used in different ways to form “virtual sensors” that provide new or alternative methods of measurement. For example, Elliptic Labs uses a device’s speaker and microphone in conjunction with our Qualcomm® Neural Processing SDK, to create a virtual sensor that detects movement using sound.

Another approach is “sensor fusion” where an algorithm analyzes signals from multiple sensors to compute results. Fusion can derive information that wouldn’t be possible or complete from using just a single sensor or micro device. For example, data from an accelerometer, gyroscope, and compass can be “fused” to estimate geocoordinates when GPS connectivity is lost.

Data from sensors can also be combined by business logic to provide information. For example, this Smart Vineyard Demo running on the DragonBoard 410c uses temperature, light, and moisture sensors to provide environmental data on which to base intelligent agricultural decisions.

When choosing a sensor there are often trade-offs to consider, so it’s important to analyze your business requirements, the target operating environment, and the following sensor characteristics:

Finally, check for compatibility between the device’s physical connections and those of your project. For example, the mezzanine board for the DragonBoard 410c offers a variety of interface options such as I2C, GPIO, and SPI, as well as voltage level shifting.

Sensing the Next Big Thing in IoT Development

Sensors allow devices to bridge the real world with the digital world. If you’ve used sensors in new and creative ways, consider uploading the details to our QDN Projects page, or search through the projects already posted for some for inspiration on what other developers may be doing with sensors. If you are just starting to use sensors with the DragonBoard 410c, we encourage you to check out the valuable resources available with 96 Boards. We’ll be taking some deeper dives on sensors and development in future blogs, so check back often if you’re interested in more details.