Some ideas make money, some change the world. Both are important

Do you plan to pitch your IoT innovation to judges or investors any time soon? Learn from six potentially profitable, world-changing ideas that found their way from different points on the globe to the Sierra Wireless Mobile IoT Innovators Challenge at the Innovation Summit in Paris last month.

For its wireless communication modules, Sierra Wireless uses Qualcomm Technologies, Inc. (QTI) products, including Qualcomm® LTE IoT modems that support global multimode capabilities with an integrated CPU. And, like Qualcomm Developer Network, Sierra Wireless has built an ecosystem around the goal of supporting developers to create innovative IoT solutions. So, we were pleased to collaborate when Sierra Wireless invited us to participate on the panel of judges for its Mobile IoT Innovators Challenge.

The purpose of the challenge was to stimulate innovation in distributed cloud computing technologies and support cellular IoT startups with 15 employees or fewer. Sierra Wireless hoped to attract ideas with the scale and impact to affect one billion people over ten years. And, of course, proposals had to use at least one Sierra Wireless technology.

First prize was USD $50,000; also awarded was the GSMA Mobile IoT Innovators Prize of participation in the GSMA Innovation City at next year’s MWC Barcelona.

Sierra Wireless’ call for proposals netted 21 qualified, written proposals. The original goal was to have each of five finalists present their idea to the panel of judges in a five-minute pitch with a five-minute Q&A. But based on the quality of proposals received, Sierra Wireless raised that number to six finalists. Invitations to those six went out on October 11.

That’s when they saw that opportunity is not as widespread as IoT and entrepreneurship are.

"Finalists needed to be in Paris on October 24 to pitch," says Ashish Syal, chief engineer at Sierra Wireless, founder of Sierra Wireless’ open source mangOH platform, and moderator of the pitch event, "but our finalists from Burkina Faso and Indonesia faced travel and visa delays, so we helped one get to Paris just in time for the live pitch event and allowed the other to pitch over a live video link."

Sometimes you need to level the playing field, Syal explains. "The whole purpose of the challenge was to show the universal nature of entrepreneurship and try to give all developers an equal chance to pitch, no matter where they are in the world. Technology directions aren’t always dictated by product managers sitting in chairs; it’s grass-roots developers like our finalists who choose platforms and business models to innovate with. People worldwide have ideas, but while the tools can be accessible to everybody, the opportunities aren’t always the same. So, contacting the consulate was an important part of showing those developers that we’re invested in their success."

What did the judges look for?

It also guided Sierra’s choice of judges: besides their own CEO and CTO, Sierra Wireless invited judges from Microsoft for cloud perspective and GSMA for connectivity. Filling out the panel was QTI Senior Product Manager Jean-Jacques Adragna, invited for his knowledge of IoT use cases. Together, the judges heard pitches from the six finalists:

Initially, selection criteria for pitches included completeness, financials, founding team, go-to-market strategy, technical strength and business model strength, with these last two the dominant factors. But as the presentations went on, the judges decided to add the criterion of social impact, reasoning that it weighed as heavily as the others.

And the winner is...

Eco-Adapt won the grand prize, with a successful combination of a good idea, business model and technical strength. 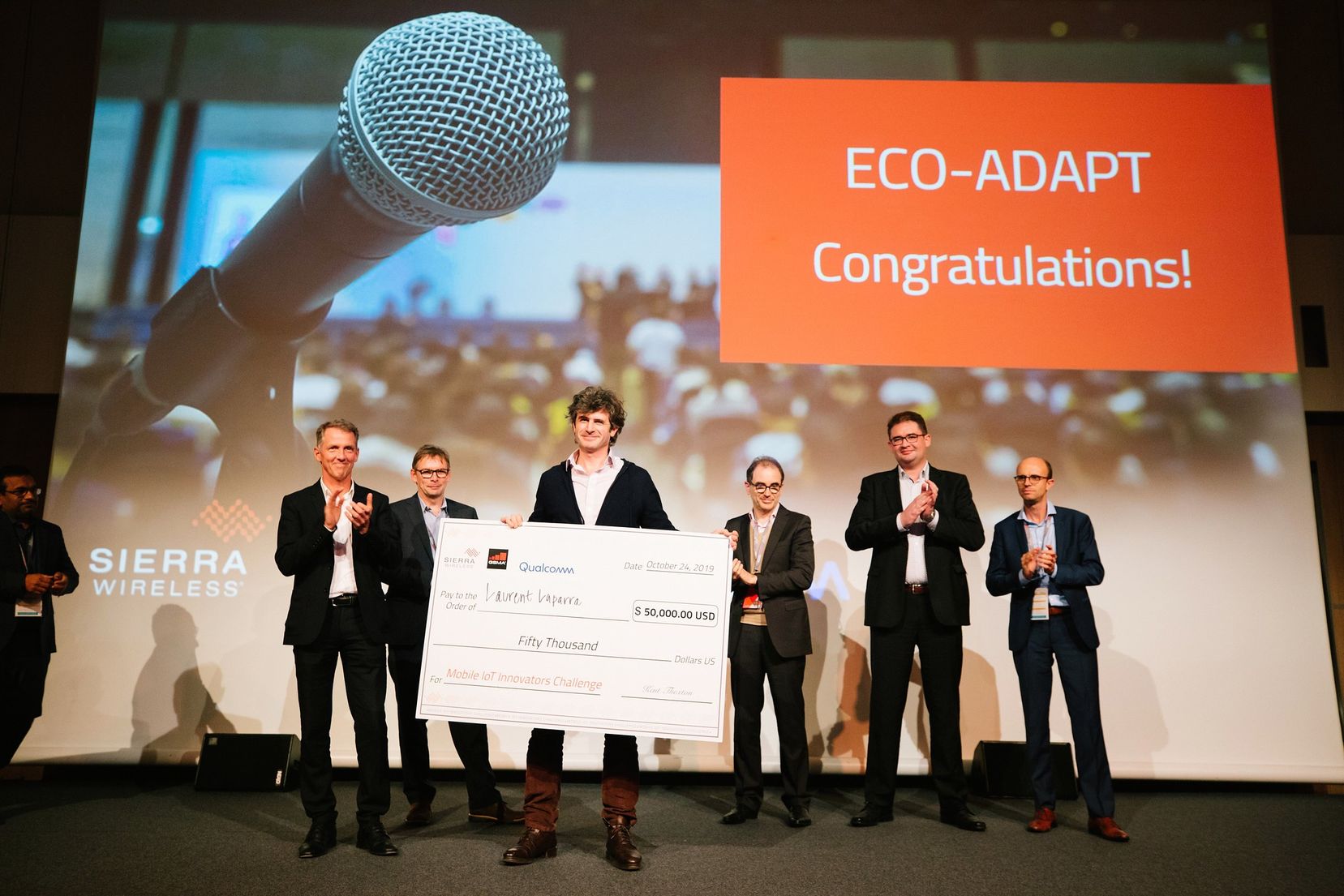 Syal advises entrepreneurs to emphasize the commercial viability of their idea. "A few years ago, people in IoT were influenced by novelty," he says. "Judges used to like seeing a smart-home thing turning on and off. But as IoT has gone through the umpteen-billion-connected-things hype, IoT has become more grounded. Now judges look beyond the tech to ask whether the business idea is likely to succeed. How does it harmonize the needs of the customer, the industry and the business? Will it be around in three years or will it have disappeared? We at Sierra Wireless want to join QTI in supporting the people with big ideas that have the potential to be profitable AND change the world."Most of all, says Syal, the winning presentation was remarkably effective. "You need to step back from how dear your idea is to you," he notes, "and plan your five minutes very well. You have to deliver all the essential arguments without getting lost in the details. The Eco-Adapt presenter knew his industry and numbers well, he knew all the right terminology and he was able to present technical strengths concisely. If you can’t do that in five minutes, then you need to practice more until you can."

In addition, the GSMA Mobile IoT Innovators Prize was awarded to Cerritech from Indonesia. Cerritech is confirmed to participate in the GSMA Innovation City at MWC Barcelona 2020. Cerritech was selected for creating an innovative and creative solution using LTE-M or NB-IoT technology, and reflects the ‘Limitless Intelligent Connectivy’ theme.

We love hearing these great stories from our ecosystem friends like Sierra Wireless, and their push to inspire more and more inspiration in IoT solutions. We hope this motivates you to look into ways you can find other developer challenges and bring your solutions to light.

To help you on your way, please be sure to check out our Qualcomm Developer Network projects – you can sort by hardware, area of interest, and other fields as well. If you have a great project you want to share with our community, we encourage you to submit that project on our page.