Are you thinking of getting a pet? How about a robotic pet dog?

The idea of a robotic canine companion is awesome, but imagine what one could do for someone with visual impairment. There’s been a focus on health and well-being at Qualcomm® HackMobile this year. We saw some great projects from our interns at Qualcomm HackMobile 2016, and Team Chasers backed this up big time with their Seeing Eye Robot project, which brought in an element of health and well-being.

The Seeing Eye Robot is intended to be an automated equivalent of a guide dog. Team Chasers wanted to use computer vision on the DragonBoard™ 410c to track movement, so that an automated vehicle can travel in front of you while you walk and warn you about obstacles.

As we look at it, innovation in social and health areas are some of the most important applications of new technology. It was fantastic to see teams choosing to work on these problems!

Team Chasers are Madeline Stager, John Drinkwater, Sarjak Shah and Haibo Zhang. We caught up with Madeline and Haibo to talk about their project. 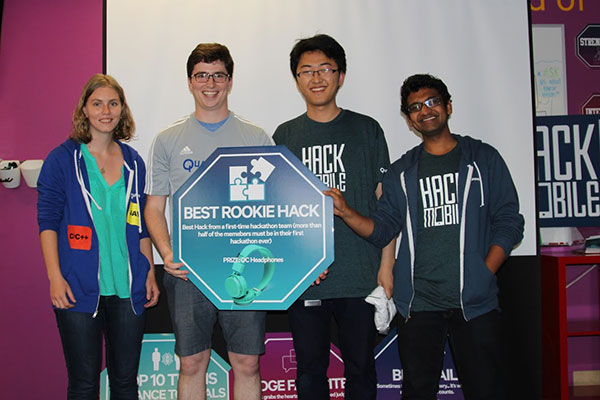 Tell us a little about yourselves and your team. How did you become interested in participating in the hack?

Madeline: I go to The University of Texas in Austin where I’m studying Computer Science. I’d never been to a hackathon before, but I always wanted to. I was an intern for Qualcomm in San Diego, and heard they were providing some awesome technology for the hackathon.

Haibo: I am a graduate student at Penn State, studying Computer Science. This was my first hackathon and I was really excited about it!

When you got your hands on the DragonBoard 410c, what was the first idea that came to mind? What sort of project did you want to work on?

Madeline: We had the idea for our project before we got our hands on the DragonBoard 410c or even knew what kind of technology we wanted to use! At the start of the hackathon, we found out we would be able to use one of the Snapdragon™ Micro Rovers. Then we talked to some of the tech experts about our idea, and they suggested using the DragonBoard 410c to control the Micro Rover and run OpenCV.

Haibo: The first part of the video is a demonstration of what our project would do if completed. The second part is demonstrating the OpenCV program we developed to track a person and direct the robot to turn left or right, and forward or backward to follow the person while staying in front of them.

What surprised you the most about the features/functionality of the DragonBoard 410c?

Madeline: I was surprised it supports Debian Linux! It’s cool to be able to develop directly on the board with a monitor, rather than needing an intermediate computer to develop on, and then to load the code onto the board.

On the other hand, we didn’t get the DragonBoard 410c to control the motors on the Micro Rover because I didn’t realize you need a mezzanine board to control them. We might continue working on it in the future though.

Do you think of yourself as a developer or maker? Maybe both?

Madeline: I consider myself both a developer and a maker. I would tinker a lot as a kid. Mostly just taking things apart and sometimes trying to fix things or make things. I did a little bit of everything from woodworking to electronics and robotics to knitting and sewing. Later in high school I discovered computer science and now consider myself a developer and a maker.

Are you using Android, Linux, or Windows 10 with your project?

Haibo: We used Debian Linux on our DragonBoard 410c, and an Android phone a little while trying to get the rover to work.

What advice would you give to someone who has never used the DragonBoard 410c before?

Madeline: Definitely look at the documentation, and ideally try to find someone who knows the DragonBoard 410c to ask questions. That helped us immensely during the hackathon.

What does the phrase "Internet of Things" mean to you? How does it apply to your project with the DragonBoard 410c?

Madeline: Our project has the potential to connect to a smart city, not only to warn someone of obstacles around them, but also to help them navigate from point A to point B and assist in many ways with someone's life.