At Qualcomm®, we are pretty lucky to work with some very talented interns. It also happens that we have a lot of cool tech for them to play with! So, it only seems natural that we should put both interns and tech through their paces with a hackathon! Thus, HackMobile 2016, a hackathon for Qualcomm interns was created.

At HackMobile 2016, now in its second year, the challenge put to our interns was to “Build Something Mobile” in just 16 hours. There was a great response as 45 teams jumped at the opportunity to sign up, and 26 teams submitted a final project. There was great creativity among the completed projects, and for the DragonBoard™ 410c, four of the top ten teams used our development board to bring their ideas to life.

Now that the dust has settled, we caught up with a few of the teams that used the DragonBoard 410c for a chat about how it went, and what their plans are for future hacks. First we spoke to Tushar Chugh, the man behind a ‘Smart Cap’ project, which was chosen as the overall winner of HackMobile 2016! You can find specifics on his ‘Smart Cap’ project on our QDN Projects page.

Tell us a little about yourself. How did you become interested in participating in the hack?
I am a graduate student at the Carnegie Mellon University robotics institute. I like to work in the intersection of technology and user experience. My passion is to create new technologies and devices which can solve tough problems for people who are at the bottom of the economic pyramid. The nature of the problems associated with this section are complex and need an inter-disciplinary approach to find solutions. My background in studying different areas gives me a holistic school of thought to come up with creative solutions to these problems.

I hold a Bachelors in Electronics, a Masters in Liberal Arts, and work as a software professional. I am also studying robotics. Some of my previous projects are listed at www.tusharchugh.com.

When you got your hands on the DragonBoard 410c, what was the first idea that came to mind? What sort of project did you want to work on?
I wanted to make use of the Wi-Fi, Bluetooth, and GPS, as well as the powerful Qualcomm® Snapdragon™ processor. So, I was thinking of the ideas/devices that people need when they are on the move. I came up with this idea of a ’Smart Cap’, which can empower the visually impaired by helping them know what is around them. At present, the system has a working implementation where you can ask the device to describe your surroundings. But the overall vision is to have a text to speech (for reading books, restaurant menus, and sign boards), facial recognition, emotion recognition and context based services. Having the on-board GPS will also allow the device to know the location of the user, and then render services based on that. 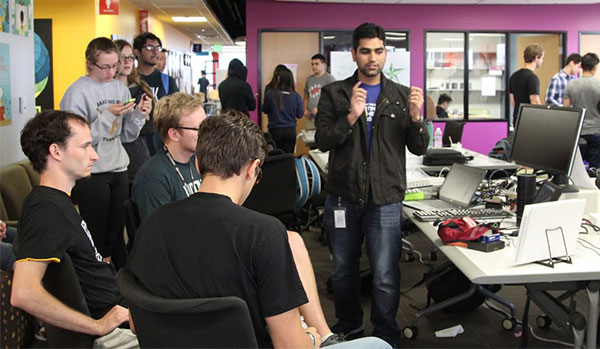 How much did you prepare in advance of the hack for working with the DragonBoard 410c? Have you done any additional work on your project since the hack? (Please share any pictures or video that you have showing your project.)
I did a little work before the hack, getting the IP address on Amazon Web Services (AWS) whenever the network is up on DragonBoard 410c. That helps me in connecting to the board through SSH when I don’t have access to an HDMI monitor (review the Report IP Address During Headless Boot project on QDN).I also installed the Linux (debian) OS on the DragonBoard 410c. Post-hack I have submitted the Alexa app for publishing on the Echo appstore! I also connected a battery, so that the system becomes truly wearable.

What surprised you the most about the features/functionality of the DragonBoard 410c?
I ran my device for 3 hours with a 7.4v 990mAh battery, and the device was still up and running. I was amazed by the computing it can provide with such low power consumption. For my application, the device takes pictures from the camera, uses OpenCV, and makes rest calls to cloud using Wi-Fi.

Do you think of yourself as a developer or maker? Maybe both?
I am developer by profession and a maker at heart! I like to build things on my own, so I have learned the tools for 3D printing, laser cutting, wood working, and so on. I have participated in, and won a bunch of other hackathons/competitions too - that includes Microsoft Imagine Cup, Accenture Innovation Jockeys, Health 2.0 developer’s world cup and some robotics competitions.

What other Qualcomm® hardware/tools are you using with your project(s)?
I am using some internal HW and networks (can’t be disclosed).

Are you using Android, Linux, or Windows 10 with your project?
Linux.

In thinking about your next project with the DragonBoard 410c, what features/functionality of the board do you plan to use?
On-board GPS and Bluetooth.

And, how would you categorize your next DragonBoard 410c project? For instance, will it be for use with the Smart Home type of project or some other use? (A general answer is fine - we’re not expecting you to give away any secrets!)
Connected Homes.

What advice would you give to someone who has never used the DragonBoard 410c before? What would you recommend for that person to get started on their own projects?
The learning curve is quite minimal if you have been working on the OS of your choice (Linux, Android or Windows IoT). Getting a mezzanine board and accessories helps in speeding up the interfacing of various sensors and actuators that can work with the DragonBoard 410c. There are a lot of helpful ‘getting started’ resources on the 96Boards’ website.

What does the phrase ‘Internet of Things’ mean to you? How does it apply to your project(s) with the DragonBoard 410c?
I really get excited when I hear ‘Internet of Things,’ which refers to the web of connected devices. The future with smart homes, connected cars and even with Last Mile connectivity in rural areas, and IoT is on its way to transform the way we live. ‘Smart Cap’ is also a connected device in that it connects to the cloud for accessing deep learning services, and also to other devices like Amazon Echo. The future of the device would also be able to connect to other devices.

Be sure to pay a visit to Qualcomm Developer Network for more information on the DragonBoard 410c.

Thread 2: Before You Get Started
XRHealth: Crossing Realities into the Future of Telehealth
Building and Porting Mobile Games with Unity
Embedding Alexa Voice Service (AVS) into IoT Devices