Wi-Fi 6 officially arrived with the release of the certification program in September 2019 from the Wi-Fi Alliance. This new generation of Wi-Fi is based on the 802.11ax Wi-Fi standard and comes with great benefits, especially improving performance for both Wi-Fi 6 devices and legacy Wi-Fi devices in today’s ultra-dense shared environments. Let’s take an introductory look at the building blocks of this new technology and some opportunities it offers IoT developers.

What’s so different about Wi-Fi 6?

Each new Wi-Fi standard has significantly improved the most commonly referenced performance spec: speed. However, that’s no longer how network performance is measured. Wi-Fi 6 was developed to deliver much higher capacity simultaneously to as many devices as possible. In other words, to ensure blazing fast speed in real-world environment increasingly defined by a surging density of connected devices. Networks today are sometimes asked to connect and manage thousands of clients, all using demanding applications, such as 4k video streaming and XR, and the end-user expects a seamless experience that the current standards don’t deliver. Add to this the growth of IoT sensors and devices, and it becomes obvious that an increase in speed alone will not meet these new, complex demands. 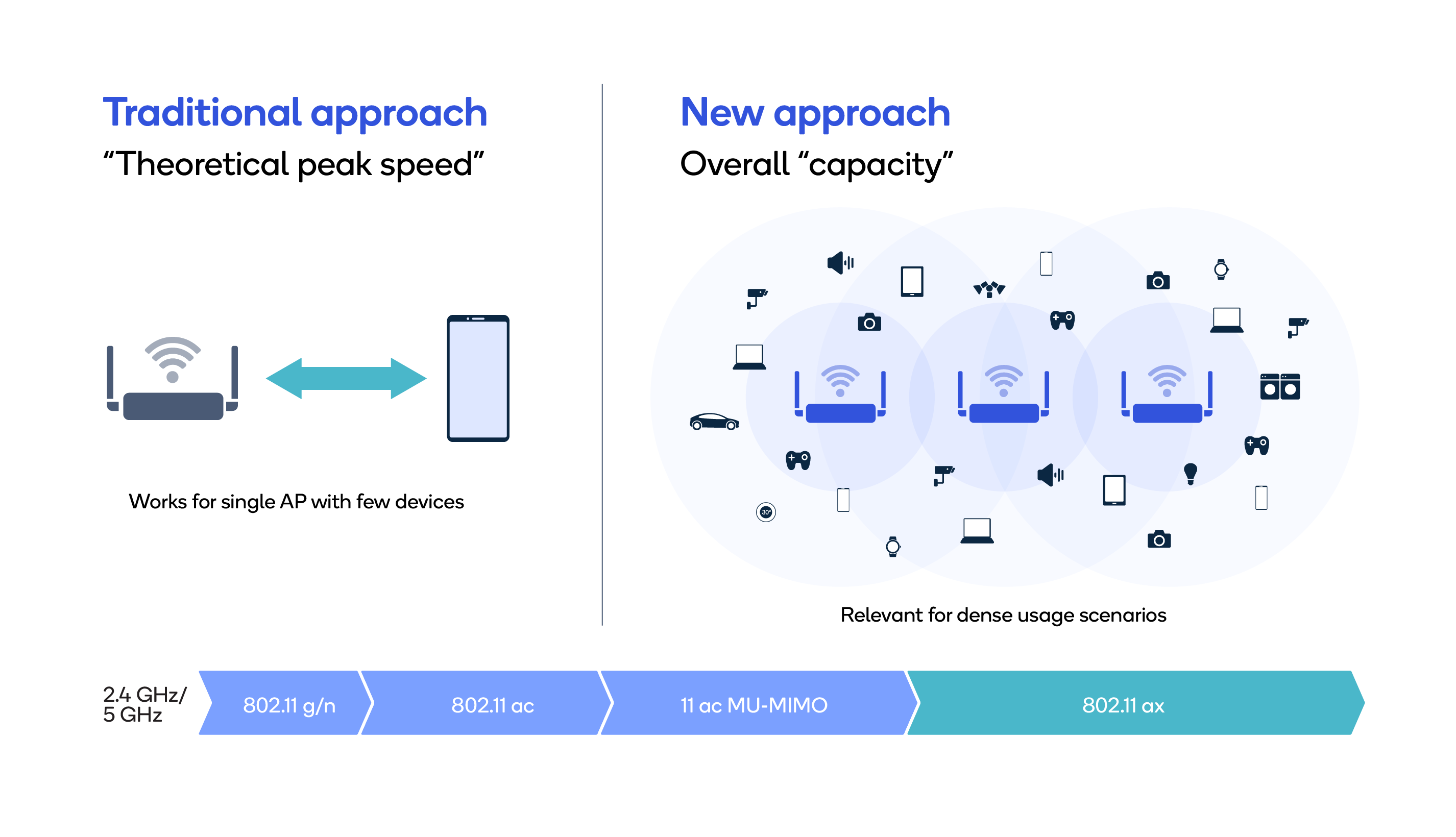 Wi-Fi 6 executes on this promise by bringing increased capacity, optimized spectral efficiency, and increased throughput and coverage, all while reducing power consumption and latency across both 2.4GHz and 5GHz bands.

How does Wi-Fi 6 achieve this?

The features that define Wi-Fi 6 address the specific needs of high-density connectivity. There are eight key Wi-Fi 6 technology building blocks that allow devices to operate efficiently in these challenging settings: 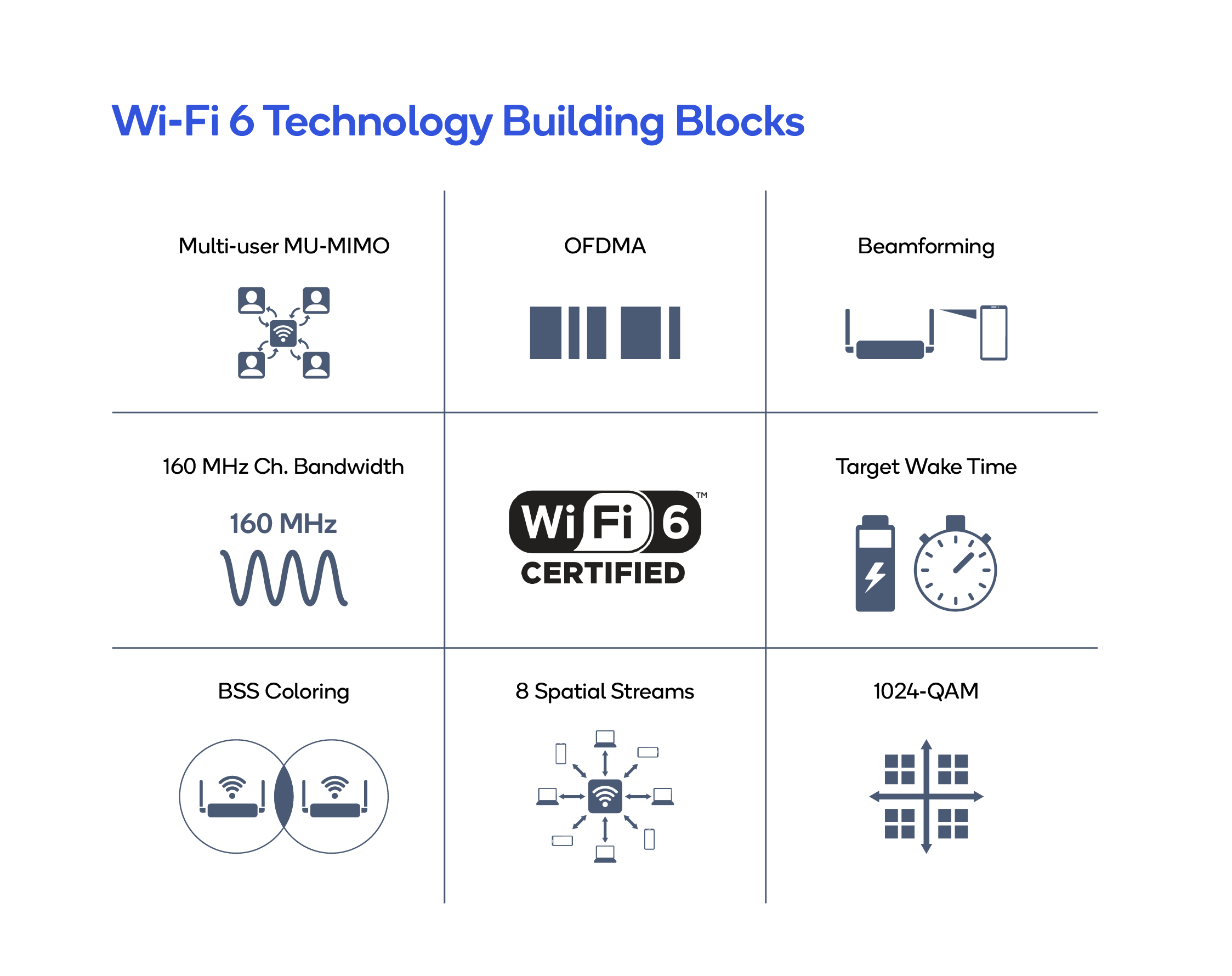 For more detailed information on each of these, have a look at this Strategy Analytics’ Whitepaper.

How does Wi-Fi 6 specifically benefit IoT?

Wi-Fi 6 offers faster data transfer speeds through more efficient data encoding. Where speed matters, those users will see a fourfold increase in average throughput per user. However, Wi-Fi 6 is multi-faceted and addresses many issues of today’s network. Many of the Wi-Fi 6 technology building blocks directly address the new demands that the growth of IoT has introduced such as range, power efficiency, and how to manage increasingly densely populated networks. In addition, a key development for Wi-Fi 6, in the IoT context, is the refurbishment of the 2.4 GHz band (11n) to leverage all the features of Wi-Fi 6 (11ax). Wi-Fi 5 was constrained only to 5Ghz band, so the tech used by a large % of IoT products have seen no new features for over a decade. Some of the most significant improvements for the IoT industry gained by Wi-Fi 6 technology are:

Higher Capacity and Efficiency – Wi-Fi 6 employs complimentary multi-user technologies OFDMA and MU-MIMO. Both can span up to 12 spatial streams in the access point, encompass both the 2.4GHz and 5GHz bands in any application or configuration, and in both the uplink and downlink directions – huge improvements that increases overall capacity and speed per user for high-bandwidth applications. Both allow simultaneous bidirectional communication between an AP and multiple endpoints, and are utilized based on channel conditions, QoS, and device/service types. APs optimize grouping and scheduling and select the best method for the next action based on customizable algorithms. The combination of OFDMA and MU-MIMO allows Wi-Fi 6 to achieve higher capacity and efficiency in ultra-high-density environments. 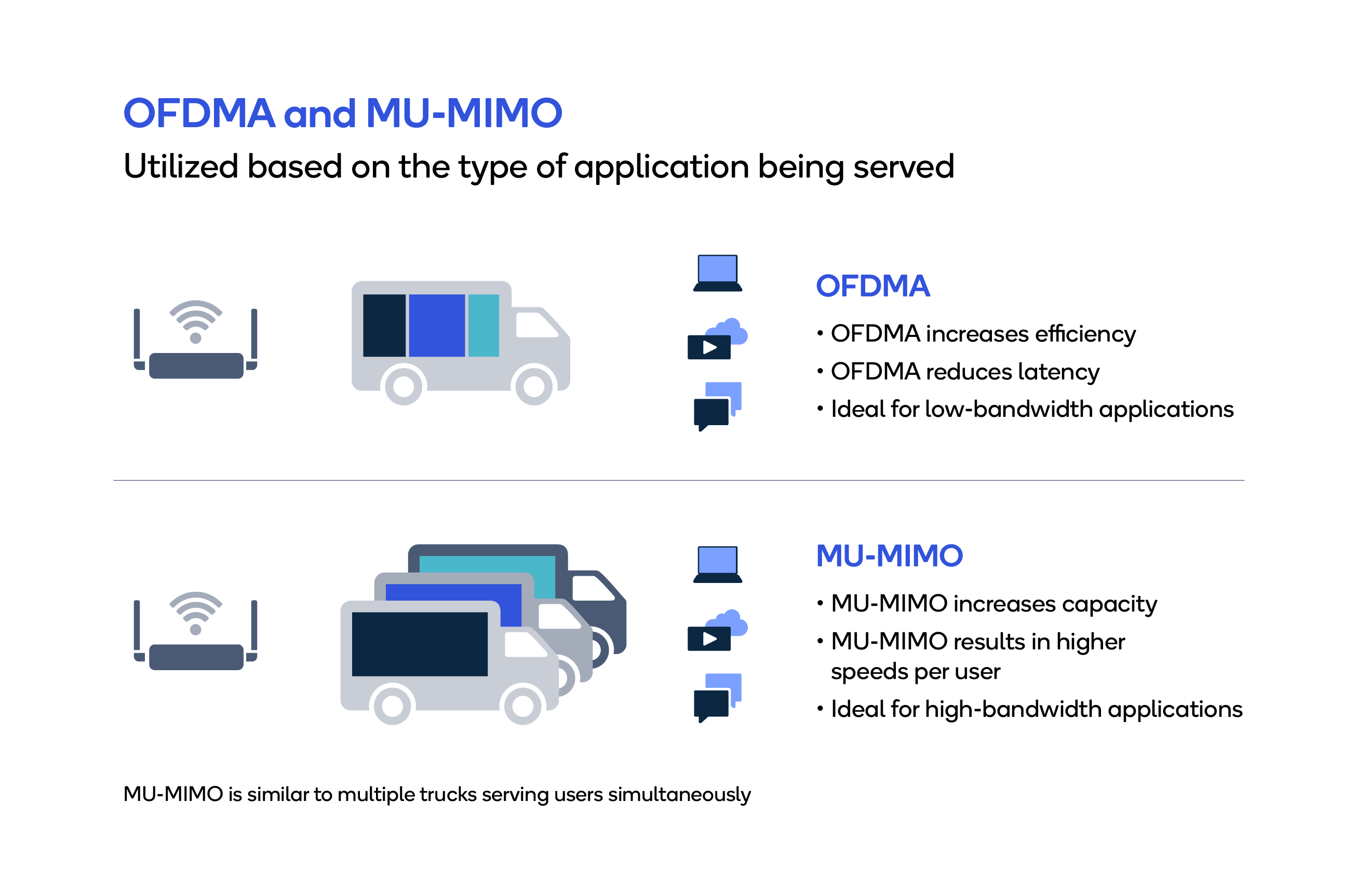 Reducing Power Consumption - IoT devices can often be located in remote or inconvenient places, making increased battery life critical in the industry. With Wi-Fi 6 the TWT mechanism has been modified to allow the AP and devices to negotiate when and how often they will wake up to send or receive data. This can substantially improve battery life by allowing client devices to sleep for hours or days at a time to reduce power consumption. 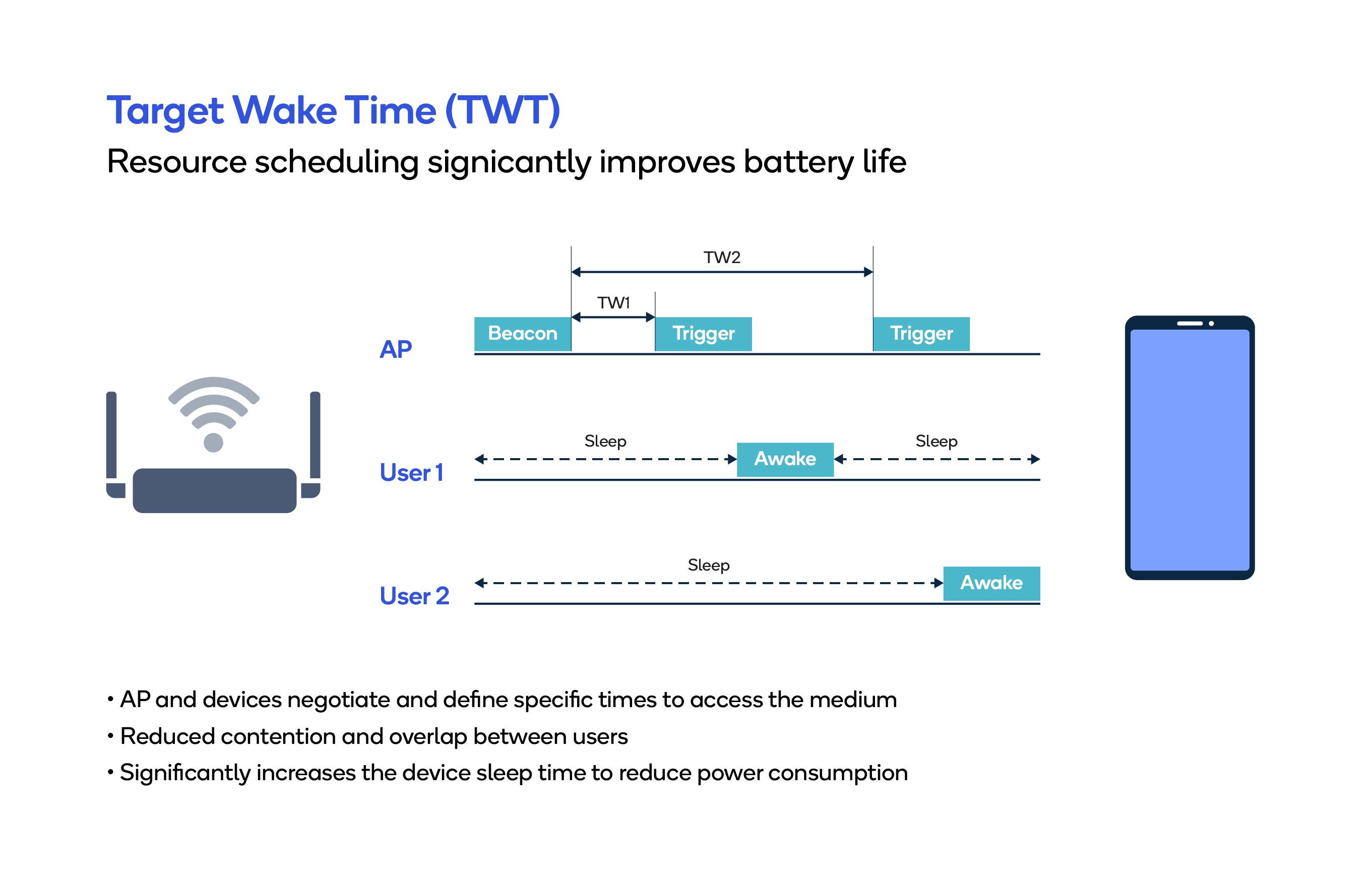 Higher Throughput - Unlike Wi-Fi 5, which improvements focused solely on the 5GHz band, Wi-Fi 6 brings the latest communication and contention techniques to 2.4GHz as well, maximizing performance across all available channels. More channels make it easier for endpoints such as IoT devices to find a clear path to the access point. By reducing the impact of noise from other devices using the 2.4GHz band, such as other APs/end-points, Bluetooth, and Zigbee, there will be better throughput and data rates which will directly benefit IoT.

Lower Cost - Wi-Fi 6 introduces support for 20MHz-only clients. This will provide support for low-power, low-complexity IoT devices like wearables and sensors that do not need high bandwidth operations. 20 MHz-only devices can also transmit/receive in either the 2.4 or 5GHz band. This also means that manufacturers can design simpler chipsets, lowering the cost for IoT devices, which can contribute to the growth and diversity of the IoT market.

Those working with the growing demands of increasingly crowded and dense Wi-Fi environments might want to check out the new Qualcomm® Networking Pro 1200 Platform.

Wi-Fi 6 is as essential to the next decade of connected experiences, and mirrors many of the capabilities of its cellular counterpart 5G. Aside from being critical for carrier networks for LTE traffic offload. Historically, each generation of cellular has offloaded more and more traffic onto Wi-Fi, including in the enterprise, because of its superior speeds and economics. 5G will also utilize Wi-Fi capacity to support carrier-grade voice and video services that may be best delivered with the cellular-like scheduling capability of Wi-Fi 6.

Of course, both of these technologies can be utilized in a complementary way across different industries due to their unique strengths. For now, some small-area private networks may specifically find Wi-Fi 6 economics are favorable to 5G.

Wi-Fi 6 has been designed to ease Wi-Fi congestion in dense urban environments, as well as some of these enterprise-class use cases by expanding capacity, extending coverage, and enhancing overall experiences. The following use cases are where Wi-Fi 6 can be fully experienced: 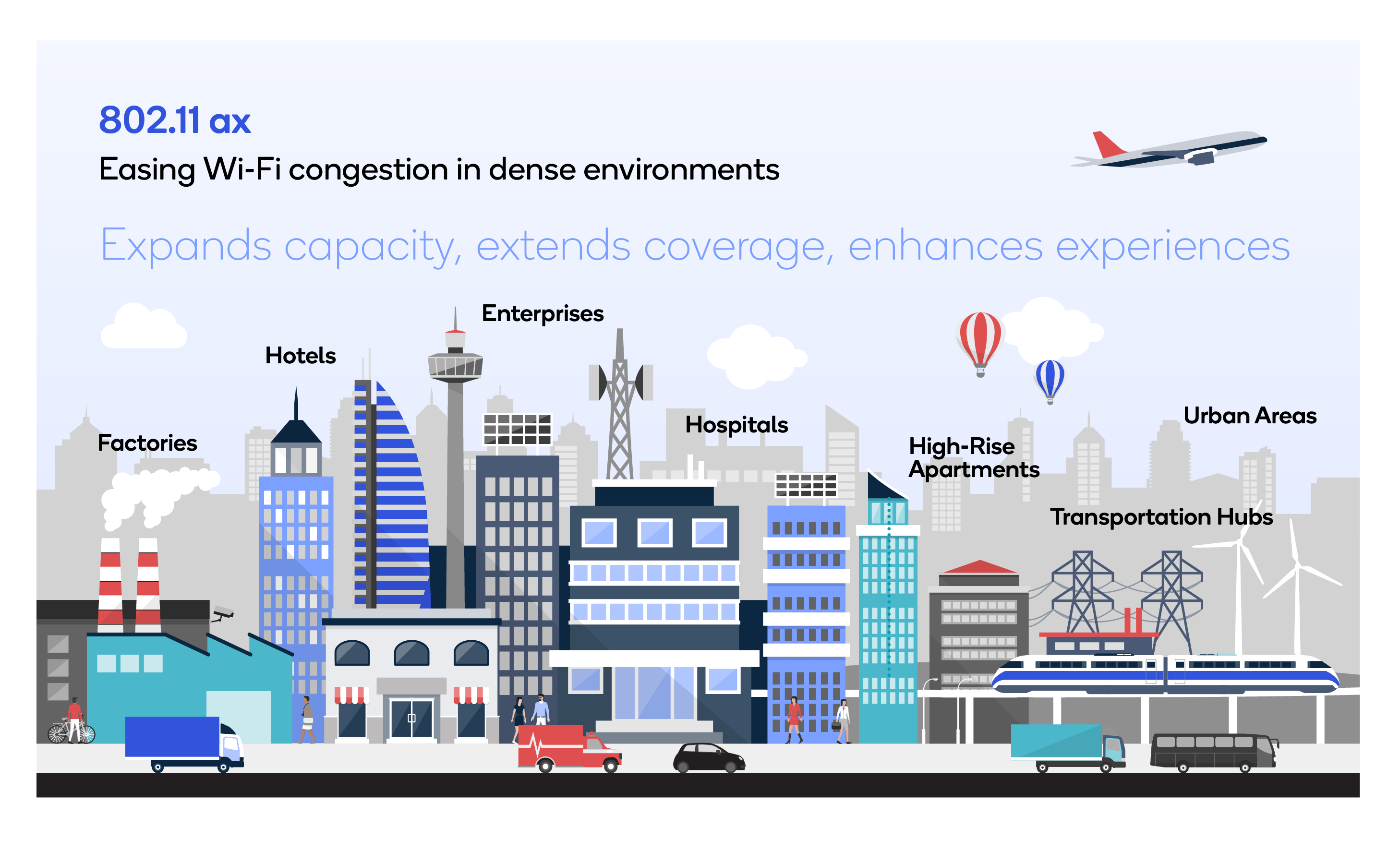 Wi-Fi 6 is designed to meet these challenges through a range of new and improved technologies that increase network capacity, optimize spectral efficiency, increase data rates, and reduce power consumption. With more predictable performance, Wi-Fi 6 has effectively transitioned from a ‘best-effort’ endeavor to a deterministic wireless technology that can meet the requirements of both enterprise and real-time, always-on, areas of IoT.