What could be more exciting than reading about how tech from Qualcomm Technologies, Inc. (QTI) works? How about discovering that our technology is being used to power new experiences in places and ways even we never imagined!

This summer, during a virtual reality (VR) workshop for kids, we caught wind of how apelab is using their technology to help 12-year olds with no coding experience build VR experiences on devices like the Oculus Quest and the HTC Vive which is powered by the Qualcomm® Snapdragon™ 835 mobile platform.

apelab was founded in Geneva Switzerland in 2014 by four graduates in interactive design, and they added an office in Los Angeles in 2016. Their studio initially focused on creating interactive stories, prototyping, and experimentation, while focusing on playful and accessible experiences.

Over the years, apelab has developed a variety of interactive experiences including games for museums and exhibitions, and has now focused their attention on the education sector through offerings like their VR workshop for kids.

A Workshop to Empower the Next Generation

Though SpatialStories is being used for professional work, apelab felt that they could use it to further push the envelope of development. Building on their belief that kids are the future of VR development, and utilizing their inherent interactive design background, apelab developed their workshop to teach kids around 12-years old, how to build a full VR experience from scratch in just four days. 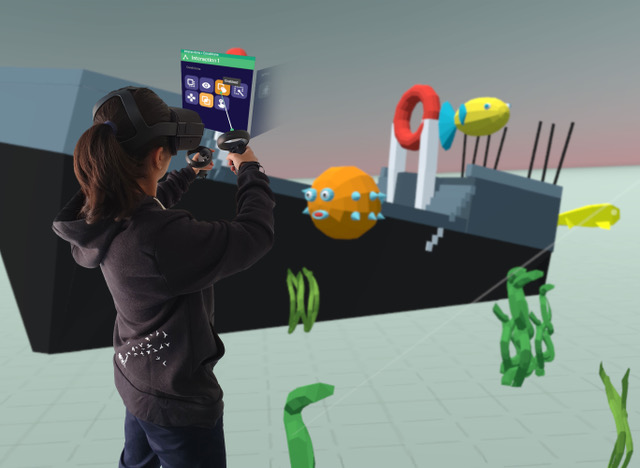 Kids begin on the first day of the workshop by designing their own VR experience. On day two, they start to model assets, and on day three, they implement those assets in Unity with SpatialStories while learning about the 3D interface. On day four they visually program their VR experience in SpatialStories and bring it to life. Apelab shared that some really creative ideas have come out of these workshops ranging from projects focused on environment sustainability to managing your own garden. Most importantly though, is the introduction of a new creative medium, that makes a seemly complicated technology easy to learn in a short period of time.

The Technology Behind the Stories that are Truly Spatial

SpatialStories, a plugin for Unity, allows creators to easily add interactivity to their 3D models. They can define if an object can be gazed at, grabbed, pointed at, and what happens when the user interacts with it. For example, when a seed collides with a hole on the grass, a tree will grow. Each interaction has a lot of options that can be tweaked, and it can be linked to another one, creating a chain reaction leading to an entire experience.

In addition to this plugin, the apelab team is working on a revolutionary creation tool called ZOE dedicated to education. It’s a standalone VR software tool, removing the need for Unity and a computer entirely. In ZOE, students will be able to import either predefined assets, or assets from a library that their instructor has chosen. Students can then build interactive experiences directly within their headset and teachers are able to manage their class from a web interface on their computer or smartphone.

Apelab says when they initially started with the first Oculus developer kit, they implemented gaze-based interactions. As hardware technology evolved, they were able to add additional inputs to their toolkit: controllers support, positional tracking, and body movements are a few examples. Collectively, today’s headset capabilities provide a whole new interface for performing design work in a VR environment, and one that can be intuitive enough for kids to pick up in a short period of time.

There is no doubt that 5G is poised to usher in the invention age, which is likely to shape the creative process through new design methodologies. VR experiences are a perfect candidate to benefit from the increased speed and reduced latency provided by this new form of connectivity. Apelab is particularly excited about 5G as they believe it has the potential to support faster streaming on mobile, which could translate into much faster rendering and ultimately better performance and improved collaborative features.

Apelab is also looking to evolve their technology in other ways, and their internal research team is constantly pushing the limits of what’s possible. Soon they plan to add machine leaning to allow for smart characters, which can be added to a scene and react to what the user is doing. They also plan to use machine learning so users can add objects to scenes using voice commands.

For the next 3 months, the team at apelab is working at RLab, an accelerator located in Brooklyn, New York. There, they will focus on bringing their tools into schools. You can sign-up for their education pilot here: www.spatialstories.net

The future looks both bright and exciting, with almost limitless possibilities. But regardless of the specific features and functionality apelab plans to add next, the outlook that they’re most excited about is helping the next generation of VR developers through today’s groundbreaking hardware and software technologies.

What’s Next in Image Processing at the Edge with NexOptic
Using Shaders for Realistic Graphics on Mobile
The Evolution of High Performance Foveated Rendering on Adreno
XR for a Changing World: Demos from the hubraum Mixed Reality Demo Day
The Psychology and Benefits of Gamifying Apps