The only thing better than having multiple IoT ecosystems on a single chip is having them all on a single development board for testing.

I mentioned in my previous blog post that our QCA4020 chip covers multiple ecosystems. You can focus on moving data among different kinds of IoT devices instead of sweating the details of connecting the devices. In this post, I’ll describe the development kit and demo apps built around the chip.

The right development kit for IoT

The QCA4020 includes radios for dual-band Wi-Fi, Bluetooth 5.0 low energy (BLE) and 802.15.4 (Zigbee 3.0 and Thread via OpenThread). In future posts in this series, I’ll go into connectivity and using Wi-Fi on the chip to connect to Amazon Web Services (AWS) IoT and Azure IoT.

The development boards at a glance...

QCA4020 development kit is designed for quick software and hardware evaluation, validation and development. Besides a passive infrared (PIR) sensor, the 6-sensor island includes a complement of IoT-friendly devices:

You can use the board’s headers as test points for power and other measurements, for direct connection to a battery and for reading the boot configuration. The Arduino connector is designed to allow you to add shields and extend the functionality of the kit. 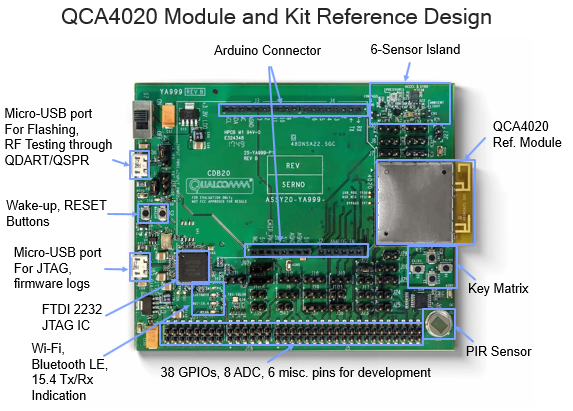 ...and the demo applications at a glance

The QCA4020 SDK includes virtually everything you need to program the board, including several directories of files and tools:

Most important to start IoT programming, the SDK includes several demo apps highlighting consumer and industrial use cases on the QCA4020. I’ll describe two of them here.

A single Android app running on a smartphone connects IoT devices over Wi-Fi to a home or enterprise access point (AP) and sets parameters for 802.15.4 and Bluetooth 5 networks. The demo includes the code needed for multiple onboarding options:

This demo features end-to-end communication between the QCA4020 (over a Wi-Fi and MQTT connection) and AWS. A mobile app receives sensor value updates (temperature, pressure, humidity) from the development kit through the AWS IoT sensor shadow and displays them.

You’ll also find a UART-AT demo for communicating with an external MCU, and an AWS cloud/mesh networking demo with browser-based dashboard. For details on all of the demos included in the QCA4020 SDK, have a look at “Getting Started” in the QCA402x (CDB2x) Development Kit User Guide.

We have posted several QCA4020 projects to help you get developing quickly, including a walk-through of the Hello World demo, onboarding demos, and even demos featuring a smoke detector and Zigbee lamp. Be sure to check them out for inspiration on your next project.

And be sure to be on the lookout for upcoming posts in this series on QCA4020. Be sure you’ve subscribed to the Qualcomm Developer Network blog for articles on IoT-related topics like cloud connectivity, security and Bluetooth 5.0. Meanwhile, order your QCA4020 development kit now.

QCA4020 is a product of Qualcomm Technologies, Inc. and/or its subsidiaries.