Traditionally, hardware constraints meant that gamers had to be tethered to their PC or game console to experience premium gaming content, while mobile devices had only enough power for simplistic and often quirky entertainment apps and games. That’s all changed.

At the 2018 Game Developer Conference (GDC), we are showcasing how our Snapdragon® mobile platforms are bringing premium console and PC-quality game experiences to mobile. Thanks to our innovation in mobile gaming and graphics, players now have the freedom to game virtually anywhere, anytime.

If you are attending this year’s GDC at Moscone Center in San Francisco, drop by our booth (South Hall, Booth #113) and prepare to be immersed! We’ll have four games in four different environments to demonstrate virtual reality (VR), augmented reality (AR) and console/PC-quality gaming experiences on mobile devices.

We’ll also have some development tools on display (which you can find on Qualcomm Developer Network) that you can learn more about. You can use these tools to develop your own premium mobile games, or to port your existing high-fidelity PC and console games over to Snapdragon mobile platforms with stunning results that rival those of traditional gaming platforms.

Let’s take a closer look at what you can expect to see in our booth.

The big attraction this year is Space Dock, a truly immersive VR game in which you battle giant hornets while freely roaming a spaceship. Walk into our Space Dock chamber, put on a VR head mounted display (HMD) powered by the Snapdragon 845 mobile platform, and start your game. Immersive audio, visual, and interactive experiences are brought to life thanks to mobile VR technologies including 6DoF inside-out tracking using dual cameras built into the HMD, the Qualcomm 3D Audio Plugin, and Ximmerse 3DoF controllers. 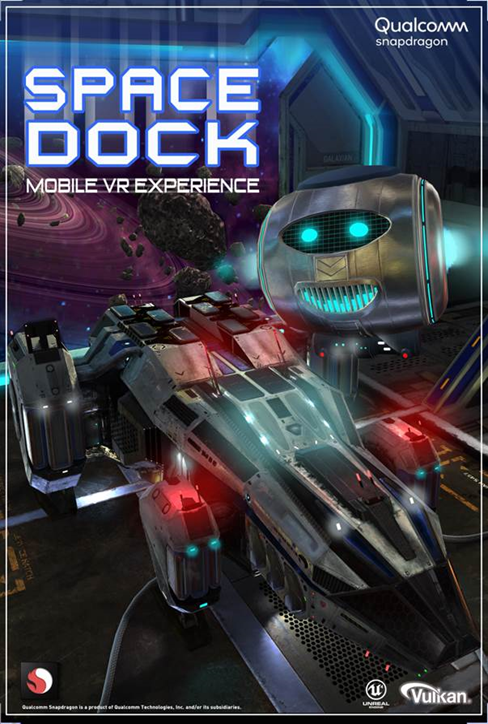 Space Dock is also the first demonstration using Vulkan Graphics for a VR experience on a standalone mobile VR headset. It uses a modified version of Unreal Engine 4.17 with the Snapdragon mobile VR SDK utilizing the Unreal Engine 4 Vulkan renderer with physically based materials. It runs at 60fps at 1440 x 2560 with an eye buffer of 1024 x 1152 per eye.

If fighting bees in VR space becomes a bit overwhelming, how about a slower-paced strategy game in AR? Head to our park, complete with a lamp post for a late-night stroll, and some comfy benches for gaming on sleek AR glasses.

Like a strategic game of chess, here you’ll experience another type of strategy game: Hologrid Monster Battle by Happy Giant. This turn-based strategy and tactics game challenges players to spend mana in an attempt to destroy each other’s monsters.

The game is experienced through the ODG R-9 AR glasses equipped with Snapdragon 835. Behind the scenes, the game is built on Unity utilizing the OpenGL ES graphics API and Unity Audio, while control comes by way of 3DoF Ximmerse controllers. 6DoF inside-out head tracking is supported using cameras built into the HMD. Running 30fps in 1280 x 720 per eye in XR stereo, this immersive mobile AR experience will have you mistaking the tranquil park surroundings for a real monster battle zone!

Once you’ve achieved monster supremacy in the park, why not meet your friends at a coffee shop or brewery for a more traditional massively multiplayer online role-playing game (MMORPG) experience on your mobile devices. Our coffee shop/brewery area is where you and friends can sit and challenge each other on Lineage 2 Revolution from Netmarble Games, which runs on our Snapdragon 845 platform.

Originally developed as an open-world, MMORPG for PCs with high fidelity 3D graphics, Lineage 2 runs in 2560 x 1440 at 60fps on mobile devices thanks to the rendering power from the Snapdragon 845 Adreno 630 GPU. The platform also features an enhanced ALU and texture support that improves performance of physically-based rendering and provides photo-realistic graphics. Behind the scenes, the game was built on Unreal Engine 4 using the Vulkan Graphics API.

Knives Out: Console-like Games Using your Mobile at Home

If playing console-style games with friends around a TV in a living room is more your style, then we have you covered. Our living room area is complete with a large screen 4K TV projecting Knives Out, a first person multiplayer action game from NetEase Games where you explore terrain and attack enemies.

Powered by four Snapdragon 845 devices and built on top of OGLES 3.1 with the new Messiah Game Engine, Knives Out demonstrates how mobile devices can deliver premium content in the home where traditional game consoles once dominated.

As game developers, the only thing as fun as playing games is making them. Once you’re done battling through the demo games, head over to our development tools station and check out some resources to help you in your game development.

Here you’ll learn about some of our tools and libraries including our Snapdragon Profiler with extensive optimization tools. You can also see eye tracking in action with the Tobii Mirror VR demo.

As the games at our 2018 GDC booth demonstrate, Snapdragon mobile platforms are leading the way in next generation mobile gaming. And Qualcomm Developer Network stands behind game developers through our commitment to proven platforms and rich development tools. So, whether its XR(VR/AR) or console/PC-quality gaming, you can now develop premium mobile game experiences that gamers can enjoy virtually anywhere and anytime.

Micah Knapp
Micah Knapp, Senior Director and lead of our Gaming Platforms product management team, works closely with developers, customers, and partners to define the next generation of gaming technology.