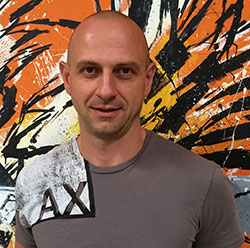 This month, we’ve selected Mika Saryan, VP of Technology at Trigger, as the Qualcomm Developer of the Month. Mika and his team combine Hollywood creativity with industry-leading technology, to create mobile apps and other original content for brands like LEGO, Nike and McDonald’s and film studios including Sony Pictures, Lionsgate, 20th Century Fox and Warner Brothers.

Over the summer, we collaborated with Trigger and McDonald’s to create McDonald’s GOL!, a mobile augmented reality soccer game using Qualcomm® Vuforia™, as the world watched the on-field action unfold in Brazil. Just recently, Trigger worked with Lionsgate on an augmented reality app for the upcoming launch of The Hunger Games: Mockingjay Part 1.

Mika took time out of his busy schedule to answer some questions for us so you can learn more about him and the work Trigger does.

How was your company started?
Trigger was founded in 2005 by Jason Yim and a core team that has worked together for over 15 years. From the very beginning the focus was on creating engaging digital experiences with the latest technology and that holds true today. We are lucky enough to work with brands and on movies that we love, which makes the whole process that much more fun and relatable.

What do you love about developing mobile apps?
There are more mobile devices in the world than humans and they are used by people of all ages; we have the potential to create apps that will reach the widest range of people and affect their lives.

What advice would you give to other developers?
Don’t be afraid of trying something new and risky, especially if people are saying: “it can’t be done”…it is one of the biggest satisfactions to prove them wrong and if you fail you will still learn something new.

Where do you and your team get inspiration for your work?
We get inspired by the challenges that are presented to us with almost every new project. There is not one technology that we can learn and keep using for months. Our clients are always pushing the technical boundaries to present something new and exciting to the users. Working alongside the amazing Qualcomm team helps us overcome those challenges.

Do you have any rituals at your company?
For a long time we didn’t have a coffee machine in the office, which made twice a day trips to Starbucks a must. It’s a great company moment; most of the team leaves the office and walks together and chats. We now have a working coffee machine, but the Starbucks trips remain.

If you weren’t a developer, what profession would you have chosen?
I would love to be a sociologist and investigate the impact of modern technology on human society overall. Are we qualitatively different than people a few hundred years ago or do we only have better tools and toys?

Who is your technology hero?
Elon Musk. He tackles global challenges that could affect humanity overall and be important 50 or even 100 years from now.

What’s something unique that makes your team fun?
We are HUGE Spider-Man fans. From Jason’s dog “Parker” to the servers and crucial documents we use daily, it’s all Spidey references. We’ve also worked on all the movies and you can basically chart the evolution of Trigger via those campaigns.

What are some development tools and resources you can’t live without?
Unity 3D. It makes it so easy to deal with 3D space and complicated graphics, which is invaluable for rich augmented reality apps.

Where do you see the mobile industry in 10 years?
In 10 years we will need to rethink the definition and scope of “mobile”. As Qualcomm and other companies push the boundaries with “Internet of Everything” the nature of challenges for developers will shift from making “shiny” new apps to making software intelligent and “invisible” to the user. And it is going to be a major undertaking since the progress of artificial intelligence over the past decades has been slower than people had once predicted.

Human-to-Human Communication with Flexible Audio Technology
Neural Network Optimization with AIMET
5G, 8K video, up to 7 cameras and 15 TOPS of processing on a drone
Introduction to Open RAN