Who doesn’t love robots? Most of us only get to see them in TV or movies, but if you’re lucky, you might get to work with them every day, and even be in a position to help other people learn to love robots as much as you do. For Thomas Eng, an engineer at Manchester, New Hampshire-based US FIRST, he gets to share his joy for robotics with young people around the world.

FIRST, which is short for "For Inspiration and Recognition of Science and Technology", is a non-profit organization that was started in 1989 by inventor Dean Kamen to encourage young people to pursue careers in science, technology, engineering and math (STEM).

Thomas works in the group that runs the annual FIRST Tech Challenge robotics competition for high school-aged kids. FIRST started out with only a handful of teams competing in New England, and it quickly grew to become an organization that will reach over 400,000 students across more than 44,000 teams and more than 200,000 volunteers worldwide. Oh, and this season, they expect to see more than 37,000 robots competing!

“The FIRST Tech Challenge competitions are similar to high school sporting events, except that the actual competitors on the game field are robots that were built and programmed by students,” Eng said.

We had the chance to hang out with Thomas this summer at AnDevCon in Boston (yes, he brought a robot with him), and then we spoke with him again more recently to learn about his work with FIRST and his joy of robotics. Read on to learn more.

What is one thing that makes your company culture unique?
I think the unique thing about FIRST’s company culture is that it really is focused on making STEM accessible and fun to the average kid.

Share a fun fact with us about your company.
The game design for the FIRST competitions changes with each season and we keep the game a secret until our Kickoff day (in early September). It’s fun for teams and mentors to try and guess what next season’s game might be, and it’s fun for the staff (who knows what the game will be) to try and leave subtle hints prior to the kickoff event.

Where do you and your team get inspiration for your work?
The volunteers who help keep the FIRST competitions running around the world keep us inspired. The wonderful team members, who are clever, determined, and gracious, also keep us inspired.

Who is your technology hero?
Dean Kamen! Dean is an inventor’s inventor, and an engineer’s engineer. He also strives to develop technologies that significantly improve people’s lives. 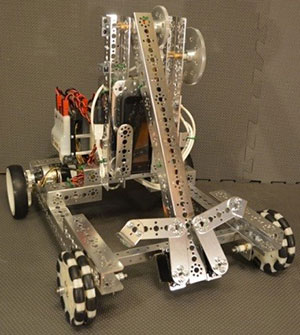 Can you tell us about how Qualcomm’s Snapdragon system is supporting the FIRST Tech Challenge?
Qualcomm has been a strong FIRST supporter for several years now. About a year and a half ago the FIRST Tech Challenge was looking for a new device that would replace the robot controller that was being used at that time - it was an end-of-life product that was about to be discontinued by the manufacturer.

We got in touch with some engineers from Qualcomm, and started to evaluate a Snapdragon system for our application. We eventually determined that the Snapdragon 410 processor was a great fit for our program requirements.

Specifically, the competitors will have access to features that include:

Tell us about other development tools you use.
We use a software development kit called the FIRST Tech Challenge SDK to allow our apps to communicate with our robot hardware, and to allow our robots to be remotely controlled by a second Android device (known as a driver station).

We use Android Studio (or Eclipse for some users) and MIT’s App Inventor (running locally via VirtualBox) to develop apps for our robots.

We also use the Vuforia Augmented Reality SDK to help with vision processing-related tasks.

How many apps has your organization created using Qualcomm products/tools?
Officially we have two apps that we host on the Google Play store: FTC Driver Station and FTC Robot Controller.

However, the most important point regarding our apps is that our competitors, who are high school students, use the FTC SDK developed by Qualcomm to create their own apps to customize the behavior of the robots that they built using their own design.

In thinking about the Qualcomm technologies that your team used in the development of your apps, how did the specific Qualcomm products meet your needs?
Our case is somewhat unique. Qualcomm graciously developed the FTC SDK that allows us to write apps to control our robots for our competition. This FTC SDK is critical – it allows our Android phones to communicate with and control our robotic hardware.

Also, the Vuforia AR library will help us in the future as we incorporate augmented reality and localization into our robotics competition.

What advice would you give to other developers?
One piece of advice that I’d offer is to consider developing apps that help bridge the digital and physical worlds. There are a lot of wonderful apps that help us manage information or time, or let us interact with the virtual world. However, an app that can interact with the physical world can be a fun and valuable solution to many real-world problems.

One of the coolest things about the apps that our students develop is that these apps help their robots interact with their physical environment. The apps help the bots gather environmental information through an array of sensors. The apps determine what course of action the robots should take, based on their sensory information and primary directives. The apps communicate with the robot’s actuators (such as motors, servos and even the phone’s speaker) to allow the robot to interact with its environment and to move around.

Where do you see the mobile industry going in the next 10 years?
I think mobile platforms like Snapdragon will continue to play an increasingly bigger role in robotic and robotically assisted technologies. Mobile devices continue to become more powerful, while consuming only limited amounts of power. These devices are ideal for robotic, wearable solutions.

“Each year we design a game challenge with a series of tasks that robots must complete in order to score points,” said US First engineer Thomas Eng. “The types of tasks that the challenges contain vary from year to year and in the past have included tasks such as auto-navigating to and scoring on a goal, or climbing up a vertical wall and doing a pull-up.”

This promotional video gives a good overview of what the FIRST Tech Challenge is all about:

For the 2015-2016 season, teams participating in the FIRST Tech Challenge are using Android smartphones powered by Snapdragon processors as the “brains” for their robots. Teams can use a variety of tools, including Android Studio, Eclipse, or MIT’s App Inventor, which is a visual design tool, to write their own Android app to customize the behavior of their robots. The teams all use an SDK developed by Qualcomm for FIRST to interact with a variety of hardware devices, including motors, servos, and sensors (including: touch, distance, color, acceleration, etc.).

To learn more about US FIRST, have a look at their website or Facebook page. The FIRST Championship event will be held in St. Louis, Missouri from April 27 - 30, 2016.