With humble beginnings as web services providers back in 2005, the team at Bratislava, Slovakia-based Analytica Design has transitioned to work on mobile technologies focusing on interactive games that make use of engaging augmented reality (AR) features.

“As our passion is found in mobile games, we were experimenting a lot with combining AR and mobile games. We found it very attractive to play these games in the real world,” said Stan Kuhn from Analytica (pictured below). 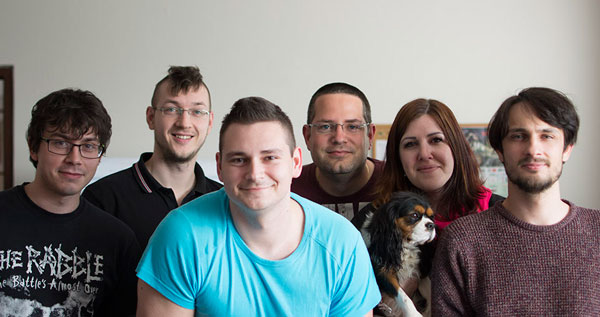 The Analytica team, from left to right: Miso, Gaspo, Mato, Stan, Lucia with Betty, and Muro

“We soon discovered that blending good real world and digital content requires very stable and robust tracking. On today's standard mobile devices this can be achieved only by tracking markers. However requiring players to download and print out markers is not very convenient. This was the point where our Live Game Board project started.”

You can see how the Live Game Board works in this demo video:

The printed board, according to Stan, is a “universal game board that could provide a real world tracker for all games.” And, you only need to buy the board once and then you can play any game that is compatible with the board. The games are offered as free downloads.

Initially, they published a game called “Monsters” for use with the Live Game Board (see image below). It is a real-time multiplayer game, and using the companion game board individuals can play the game with friends. The game also uses a feature of the Qualcomm® Vuforia™ mobile vision platform, Smart Terrain™, which allows users to customize the game by placing objects around the game board. These are scanned by the game, and things like towers, portals or life wells are created in their place. This gives users control to create a unique game scene every time they play the game. 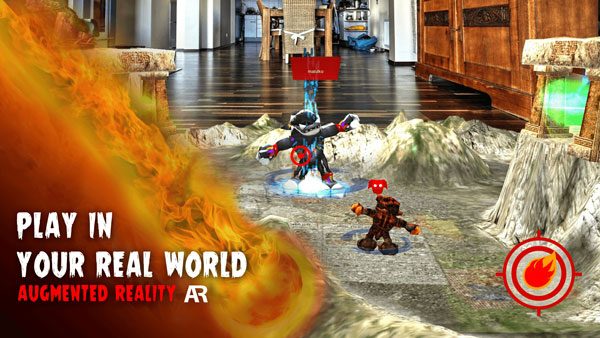 The Android version of the game also features dual camera set up to use the game with head-mounted displays like Google Cardboard or RVOne, Dodo case, Homido or others. The game view is split on the mobile screen to have the game rendered for each eye while the camera background is still projected. “When you look down at Live Game Board, the game appears right in front of you. As the phone is inside a head mount, you need to use a Bluetooth gamepad to control the game,” Stan noted.

They have also prepared the game for use with Samsung Gear VR using Oculus mobile SDK and Vuforia Eyewear SDK. That version of the game is not yet published, but a working version was used by the Vuforia team at the GDC conference. “We'll publish Monsters for Gear VR in the near future,” Stan said.

We recently caught up with Stan to learn more about the work at Analytica Design, their sources of inspiration, and to see how they are using Qualcomm technologies in their apps.

What is one thing that makes your company culture unique? Do you have any rituals?
We get one Carajillo in the morning when we get to our office to kick off our day.

Share with us a fun fact about your team.
More than half of the people who ever worked with us have the first name Martin!

What do you enjoy about developing mobile apps?
It's amazing what you can do with such small computers. It will continue to surprise us more and more, as it gets into clothes, watches and other wearables. It's exciting to imagine experiences it can provide, and even more exciting when you can get it done.

Where do you and your team get inspiration for your work?
Seeing many great tech start-ups bringing VR and AR gadgets is very inspiring and motivating.

Who is your technology hero?
Well, actually that would be our office dog, Betty. She knows best, always.

When enduring a long day, how do you and your team stay energized?
Pizza and coffee are our best friends!

Tell us which Qualcomm and other development tools you use.
The tools we mainly use are Unity3D, Eclipse, Xcode, Photoshop, Oculus mobile SDK and Vuforia. We use the Vuforia SDK as our main AR platform.

In thinking about the Qualcomm technologies that you or your team uses in the development of your apps, how did the specific Qualcomm product assist in the final development of your app?
Vuforia speeds up AR development for mobile a lot. Not only can we develop faster, but we also get many great features that we can use to build up AR experiences on top of our games.

Did the use of Vuforia™ help to overcome any specific problems you were facing during the development of your app?
Yes, cloud recognition and object recognition are not trivial tasks. Vuforia gives you this ability quite easily.

How many apps has your company created using Qualcomm technologies?
There are several, including:

Where do you see the mobile industry in 10 years?
In 10 years we will probably interact with our phones less with our hands than in other ways. We'll have it stuck to our face for VR and AR, controlled by a watch or wrist remote device. We'll be putting them into our cars. Mobile phones will eventually become just part of wearable computers to give it the ability to make phone calls.