Are you a big picture thinker, or someone who gets absorbed by solving all of the little problems that go along with app development and coding? Wouldn’t it be great if you could combine both perspectives in your day-to-day work? That is how developer of the month Nathaniel Wendt, a postgraduate student working on his doctorate at the University of Texas at Austin, tries to approach his work by combining big ideas with his vision for how to solve problems. 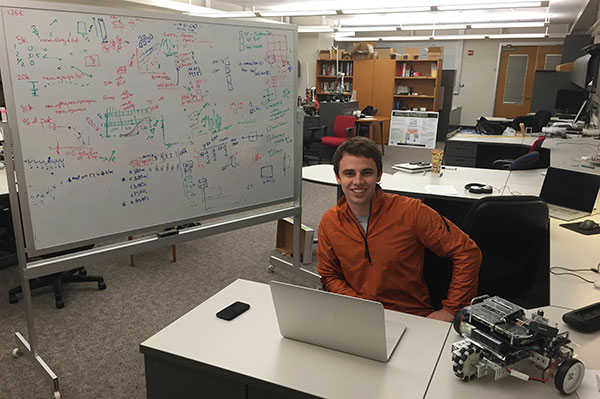 His research focuses on “improving mobile computing.” As he told us, “I am working on a couple of projects, the most significant of which aims to transform some of the assumptions we make about mobile/app architecture. I'm trying to push devices to support vast amounts of data sampling, intelligent context derivation, and better user control of potentially sensitive information through an on-loading approach.”

Nathaniel’s primary research evaluation was conducted using Trepn™ Profiler, available on the Qualcomm Developer Network. While Nathaniel’s project is not intended to be consumer-facing, there is a repository available on GitHub for those who are curious about this work.

He is also looking to build a framework for better supporting scalable (i.e., with respect to network and device demands) applications. “I want developers to be able to write one app that can assemble itself for the billions of users with advanced communication infrastructure as well as in resource-constrained developing nations, helping bring the next few billion online,” he said.

And in his spare time - yes, he is a student, so there isn’t a whole lot of that! - Nathaniel co-developed a mobile application for Android users, currently in beta, called Nominate. “The app is a fun, social application for challenging Facebook friends, similar to the ALS Ice Bucket challenge,” he told us. 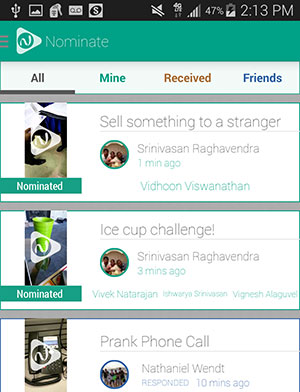 Screenshot of the Nominate app.

We recently caught up with Nathaniel, and asked him to tell us more about his work, and his sources of inspiration.

Where do you get inspiration for your work?
My inspiration comes in two parts. The first is the compelling nature of wanting to start working. This inspiration, for me, is fueled by “big ideas”. In other words, when I am able to have a vision for where a project is headed longer term, I tend to get much more excited about working in general, even on projects that aren’t directly related. This big picture vision is amplified when I find a real need for the outcome, whether it’s talking to real users, or reading an inspiring blog post.

The second part is the smaller nature of getting engulfed with a specific problem. Most developers can relate to being locked into a small feature development or bug fix where hours seem to fly by. Once I have the big picture in place and starting me on my way, I get hooked by the small problems that take my immediate attention and inspiration.

When enduring a long day, how do you stay energized?
I take power naps when I am short on sleep. Otherwise, I try to work out or do something active in the middle of my day to prevent the tiredness slump.

What do you love about developing mobile apps?
What strikes me as most compelling about developing mobile apps is the ability to reach a mass audience. If you make something that is really useful, you can have it in the hands of users in a matter of hours. Millions of people are carrying around devices that support the software that you are developing, so it is truly just a matter of finding the right opportunity at the right time.

How did the Trepn Profiler product assist in the final development of your app?
The Trepn Profiler made the evaluation process much easier and thorough, allowing us to focus on the research we were evaluating. We were able to record network data as well as energy usage on a finer granularity than using Android’s BatteryManager. It would have taken a considerable effort to determine these values without the Trepn Profiler. Furthermore, Trepn was well documented and learning the tool was painless.

Did using the Trepn Profiler help to overcome any specific problems you or your team were facing during the development of your app?
Energy measurements had become a metric that reviewers of papers were requesting so several group members converged on the need for a tool like Trepn. The marker feature also allowed us to denote important portions of evaluation, simplifying our data analysis.

Where do you see the mobile industry in 10 years?
I predict a smarter, more connected, and more privacy-centric mobile industry in the next 10 years. Currently, apps live in isolation for the most part and contextual sensing is done in a simple manner (i.e. current location & time). As applications become increasingly intelligent, they will need to derive context across applications and devices. Apps will operate continuously without explicit user interaction and will only call for attention when they are contextually useful to the user. Additionally, devices will be constantly querying peers to learn about surroundings and headings to enrich their own knowledge. As users demand control of this exhaustively detailed personal and potentially private contextual information, user databases will need to be stored securely with appropriate access control. Ultimately, it’s an exciting future for mobile computing that offers many challenges ahead.

What advice would you give to other developers?
Don’t get trapped by the pitfall of assuming that everyone is either an amazing or terrible developer. Naturally, most people are average programmers, so stop trying to lock everyone in one of those two extreme categories, including you! Each programmer has talents that can complement one another. Jacob Kaplan-Moss, who is one of my personal technology heroes, has a great talk about this subject that you can view online.

Developer of the Month: What Can Machine Learning Bring to Photography? Find out with Nikos Fragoulis of IRIDA Labs
New Tool Helps Game Developers Ease Transition From Console & PC To Mobile
Tips for Using Trepn Profiler
What’s Going On Inside Your App? Let Trepn Profiler Show You.