When you bring together a tech-savvy crew of developers who also have a personal stake in the solution they are trying to build, the results are bound to be impressive. That was the case for the Tampa, Florida-based team behind KineticCare, who traveled to Las Vegas at the beginning of January to compete in the 2016 AT&T Developer Summit Hackathon. 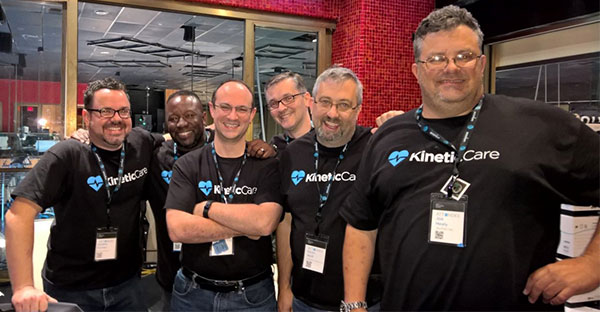 It was personal on a couple of levels. For team member Joe Healy, he was supposed to compete in the same event the year before, but was unable to attend due to the sudden death of his father. As Joe explained to us, “If I’d known quickly he was down, would he still be alive? What could I, alpha-nerd, have done differently so that he would still be alive?”

Another member of the team has a wife who is currently fighting cancer and undergoing chemo treatments, so he is understandably worried when he needs to be away from her for any length of time.

A Solution Takes Shape
Late last year, anticipating they would be competing in the 2016 Hackathon, the team gathered at a local watering hole to discuss possible ideas for their entry in the competition. Initially, they considered a wearable heart monitor that could “transmit data to the Internet using simple IoT mechanisms, or on a peer-to peer level with other devices,” Joe said. That idea led to “a larger vision around an affordable home health monitoring and action station.”

With a plan in place, the team got ready to put their skills to the test in the Hackathon. Although, as Joe told us after the competition, this would be new territory for him. He is a line-of-business programmer, who is normally building things like ASP.NET, Windows 10, Xamarin, and VS-Cordova apps for business use - not someone who you would expect to be using the DragonBoard™ 410c.

The DragonBoard 410c Is The Hub
As the team continued to dig into their idea of a home healthcare monitoring system, they began to see that the DragonBoard 410c could be the hub of the system. As Joe told us: “Imagine a home health scenario that uses a low cost, self-contained, wall-mounted unit - like an air conditioning controller - it would be touch screen driven, have embedded sensors and offer infinite capabilities.” They wanted to ensure this unit could be affordable, powerful and flexible for a variety of uses.

There was some concern their idea might be a heavy load for a small board like the DragonBoard 410c, but they found that it “stands up admirably under pressure.” As Joe said, “You get a heck of a lot of power for a $75 board.” In reality, they were using the DragonBoard 410c almost like a PC.

The team was also pleased by the flexible programming options available to them when using the DragonBoard 410c. For their project, they went with Windows 10 IoT so they could develop “a fantastic, touch-driven, scalable user interface able to talk to sensors, using C# and XAML, very, very quickly.” After all, at a Hackathon, the clock is always ticking down.

For the Hackathon, Joe was assigned the work associated with the DragonBoard 410c, so he spent time getting to know it and how to provision Windows 10 IoT - he didn’t want to come up short when the pressure of the competition was on. As Joe told us: “A few times the DragonBoard 410c became non-responsive during the event. I expect it was from me crossing a few wires here and there, or maybe dumping some coffee on it! Being able to re-provision them quickly became a key factor. The boards are amazingly tough! I carried the final show unit in my pocket unshielded and it still ran like a champ at the end.”

Here’s the list of hardware the team used for their project:

At The Hackathon, Sleep Is For The Weak
The morning of the Hackathon, the team picks up a dev kit from Qualcomm Developer Network, which includes a variety of hardware they will be able to use with their project, and then they had only 24 hours to put together a working prototype. 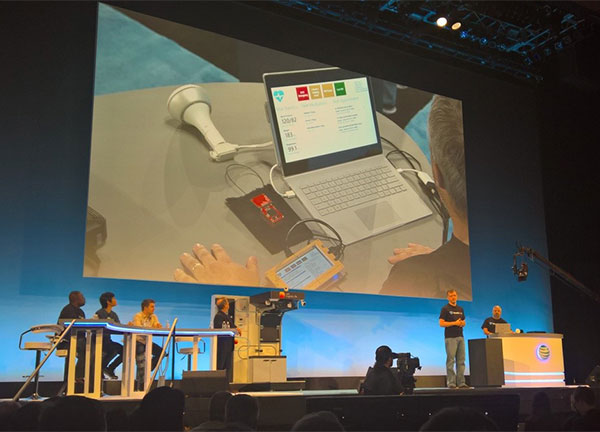 After the first rounds of judging were completed, the team learned they had made it to the top 20 innovative apps, and this was out of 1,400 developers representing more than 130 teams. From there, they make it to the top three, and they will present their solution on stage for popular text in vote by the audience during the AT&T Developer Summit keynote by Ralph de la Vega, CEO AT&T Mobility.

The team has now been awake for about 36 hours, but they still need to do final prep for the biggest pitch of their lives. As Joe told us, “Everyone was nervous, yet confident.”

And The Winner Is...
The preparation, teamwork and sleepless nights paid off. 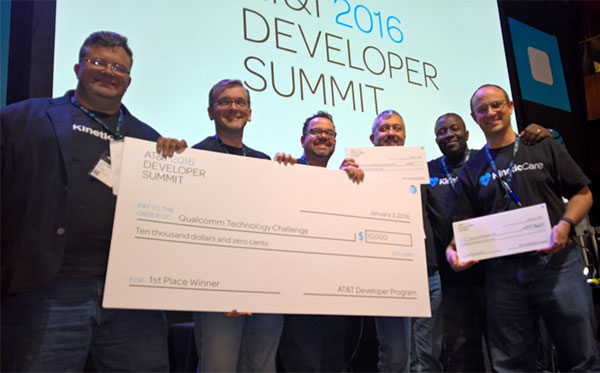 The KineticCare team wins the Hackathon Grand Prize of $25,000, plus $5,000 in Harman Gear, and Five GenZe Electric Scooters. They also win in the following categories:

What’s Next For KineticCare?
And now things start to get really interesting for the team behind KineticCare. They have already been approached by VCs, and they have been invited to several large speaking engagements to talk about their concept. “I can’t go into details but they are big. Definitely interesting,” Joe tells us.

“Personally, I’d love to see KineticCare in my mother’s house,” Joe says. “Moving this forward is going to be interesting. We have team dynamics and partnerships and time commitments and day jobs to work through. But KineticCare’s vision is beautiful... We have things to ponder. Choices to make. I could have worse problems.”

The members of team KineticCare are:

To keep up with their project, be sure to follow KineticCare on Twitter and watch how they brought their winning app to life with the DragonBoard410c below.

How ColdTrace X is Protecting Life-Saving Vaccines, One Cold Room at a Time
Connected Car and the Snapdragon Digital Chassis
The Architecture of Snapdragon Spaces
Autonomous Mobile Robots: What do I need to know to design one?