Let’s face facts: recycling is a real chore. Yes, we all know it is important, but it takes time to sort through all the stuff that can be recycled versus what you should just throw away. Wouldn’t it be nice if there were some options out there to make recycling easier, and maybe even reward the person doing the recycling?

The seven-member team of developers known as “Team Robbie” came up with a pretty cool idea during the 2016 AT&T Developer Summit Hackathon that took place this past January in Las Vegas to address the hassles of recycling and make it more of a game - a way to teach kids, especially, how to recycle. 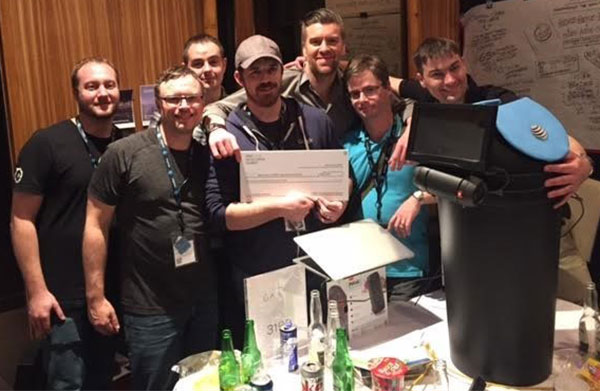 Ultimately, Team Robbie submitted an app-enabled recycling bin built with robotics that helps children learn about the importance of recycling and reducing waste, and also rewards them for their efforts.

According to Team Robbie member Greg Powell, his group was inspired by the products and challenges provided for the Hackathon. "We came up with our idea after researching the individual API’s and Challenges presented the night before the Hackathon began." He went on to say that "the DragonBoard™ 410c was the most complete kit to develop with, and in particular we intended to use it with an external camera."

The Team Robbie project included a lot of components - both physical and software-based. As Greg told us: “There are three main components to what we made: the cloud services we used, the app, and Robbie himself.”

Team Robbie used the following APIs to bring their robotic recycling bin - and the app - to life:

Those last two elements were a big part of Robbie’s charm, since the user is incentivized in a subtle way to take recycling seriously.

Greg noted that the team wanted to focus on sustainability and education. “We put a lot of thought in how we can redefine learning with technology.”

Following their win at the Hackathon, we had a chance to speak with Greg and his teammates in more detail about their project. Read on to learn more about their inspiration, and future plans.

When you got your hands on the DragonBoard 410c, what was the first idea that came to mind? What sort of project did you want to work on?
We wanted to simplify recycling and make it easy for children to interact with and learn from. The original desire was for Robbie to be able to recognize an object for recycling, to tell you what it was and open the corresponding bin to place it in, then Robbie rewards you and your community. We ended up using a gesture sensor to detect items moving into the bin and reporting that data to M2X against individual, neighborhood, and city goals. 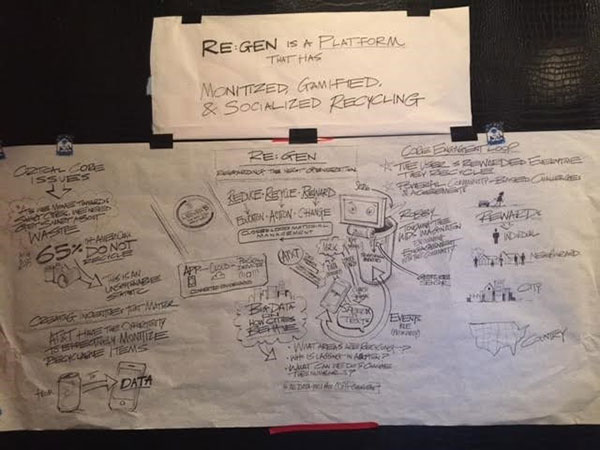 Can you provide a short description of what "Robbie" does?
Robbie is just one component of our recycling platform. He is the first in what we hope to be a series of advanced recycling bins. Robbie was created for us to be eligible for the education category so we gave him a character. When you interact with him he is happy and when you don’t he is sad. He rewards you for recycling.

What surprised you the most about the features/functionality of the DragonBoard 410c?
The horsepower was impressive because we had five encodings running simultaneously at 1080p to create the seamless expression of Robbie's eyes.

What advice would you give to someone who has never used the DragonBoard 410c before? What would you recommend for that person to get started on his/her own projects?
Follow the instructions and you will be fine! The Android Bluetooth framework is a bit tricky to use, to no fault of Qualcomm, but users should be aware that they should allocate a good block of time dealing with this should they choose Android as their platform and use the onboard Bluetooth LE chipset.

Are there plans to make a commercial version of Robbie, or was this purely proof of concept?
We think that there is potential to make a commercial product based on the concept of Robbie along with the platform of services we created to bring him to life. The entire platform would serve as an excellent non-profit or for-profit startup opportunity for a team willing to work closely with cities or municipalities to revolutionize recycling incentives in a highly scalable manner.

Do you think of yourself as a developer, or maker? Or maybe something entirely different?
Developer, maker, creator - it is all fun. One of the most incredible aspects of our team was its wide diversity, from the creative designer and software engineers to the business “pitch guy” and hardware engineers. This gave us incredible freedom to create and develop outside the confines of one discipline.

Greg and his teammates all have plans for their prize winnings from the Hackathon. Greg plans to buy a new smartphone. As he noted, "If you want play in this arena you have an advantage with the latest technology." Another team member is planning to upgrade his personal development environment, one of the guys is planning to use money towards a trip this summer, and another is donating his winnings to a local school district to buy hardware for their new Creator Lab.

And of course, Greg already has his sights set on returning to the AT&T Developer Summit Hackathon in 2017. “My teammate Ryan Peterson (CEO of Vancouver's Finger Food Studios) asked me if I wanted to go again next year and I said 'Yes!' without hesitation and really meant it. According to Malcom Gladwell in his book Outliers: The Story of Success, it takes about 10,000 hours to master a skill. I felt like every member of our team was a master at their craft; it was thrilling to watch them in action and to see the final result of only 24 hours of concentrated effort.”