At Qualcomm, we truly love the enthusiasm of our interns. Take for example Cyrus Tabrizi, a student from Carnegie Mellon who was an intern with us last summer. He brought tremendous energy to his work every day, and helped us out with several projects using the DragonBoard 410c.

Over the summer, Cyrus had the chance to compete in the Qualcomm IdeaQuest program, which invites interns to come up with a unique idea, form a team, and then present the idea to the company. Cyrus could not wait to get started, and after making it through the initial qualification rounds on his own, he recruited other interns to work with him on a full-fledged team.

The team that Cyrus formed (he is pictured second on the left below) was predominantly college freshmen, and yet their work went head-to-head with teams that had a lot more experience. In fact, his team was selected to be a finalist in the competition, and they were invited to pitch their idea in the executive boardroom!

If you are considering working on a project with the DragonBoard 410c, and need some inspiration for your own project, read on to see how Cyrus was able to use the board in some clever ways.

When you got your hands on the DragonBoard 410c, what was the first idea that came to mind? What sort of project did you want to work on?
I had many ideas for the DragonBoard 410c when it was released, but I was most excited by its potential usage in the fields of robotics, 3D-printing, and IoT. The main source of my excitement was the board’s combination of powerful on-board processors, many GPIO options and integrated connectivity solutions—a combination that is also affordable and provided in a convenient form factor. It was the projects where these features would be most beneficial that my mind first raced to!

Have you been able to bring this idea to fruition - and if so, how long did it take you to complete this first project?
At an intern hackathon, my group was able to use the DragonBoard 410c along with a tablet and some AllJoyn internet-connected light bulbs to make waking up in the mornings easier. We did this by syncing alarms on the tablet with gradual changes in ambient lighting — the same changes you would expect from natural sunlight every morning but available to you at any time. Since this was for a hackathon, we had just over half a day to get our project working.

I also had the opportunity to explore the role that the board can have in the 3D-printing ecosystem. For Qualcomm’s intern idea contest, I formed a team that focused on the many 3D-printing features that Qualcomm technologies like Snapdragon processors could deliver. To demonstrate just a few of these features, my teammates and I set up software on the DragonBoard 410c to allow 3D-printers to run with only the board connected to it—no laptop or desktop required. Many have previously done this with Raspberry Pi’s, but we believe we actually demonstrated a more convenient alternative since the DragonBoard 410c comes with built-in Wi-Fi and Bluetooth as well as advantages in processing power that improve the user’s experience with the printer.

Our next goal was to replace the internal controllers in these printers with the DragonBoard 410c by putting its GPIO to use. We did not have enough time before our demo to get the GPIO running quickly enough for our two 3D-printers, but we were able to control them over USB after a few hours of experimenting and installing various programs and packages. 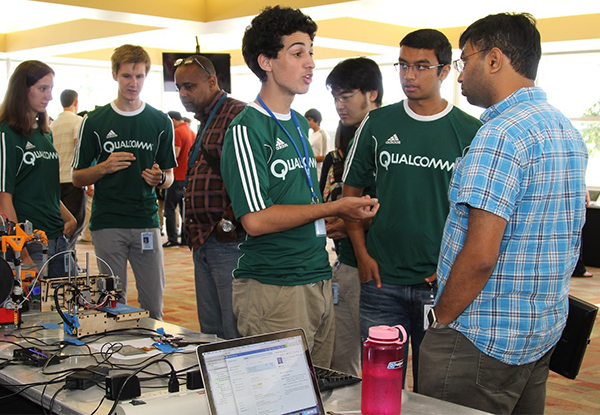 What surprised you the most about the features/functionality of the DragonBoard 410c?
I was surprised both by how smoothly it ran and by its form factor—it has an awesome range of peripherals given that its roughly the size of a credit card but also as slim as the thinnest smartphones. These features—as well as its powerful CPU and GPU—make the DragonBoard extremely exciting to use.

Do you think of yourself as a developer or maker? Maybe both?
As an undergraduate studying ECE and Robotics at Carnegie Mellon, I consider myself a mix of both developer and maker. As a maker, I take on projects because I find them to be fun and valuable learning opportunities. As a developer, I use my personal projects as a chance to invest serious time and energy solving real problems or iterating on existing solutions.

Often, I find that the projects I am most excited about are the ones where there is an opportunity for me to improve the world in some way. This could be something as simple as building a tool that allows people to be more efficient or to conduct new processes—that is what led me to design my own 3D-printer and publish instructions on how to replicate my Handuino controller designs.

What other Qualcomm hardware/tools did you use with your project(s)?
So far, I have mostly been working with the DragonBoard 410c, but some of my projects have included AllJoyn too.

In thinking about your next project with the DragonBoard 410c, what features/functionality of the board do you plan to use?
It will take some work, but I would like to make use of the board’s various peripherals (USB ports and low and high-speed connectors) as well as its built-in Wi-Fi, Bluetooth and GPS.

How would you categorize your next DragonBoard 410c project?
Robotics. On a given day, there is a 99% chance I am thinking about designing robots or actively working on one. Chances are that my next project with the DragonBoard 410c will involve a robot or two!

What advice would you give to someone who has never used the DragonBoard 410c before? What would you recommend for that person to get started on his or her own projects?
At least for development on the Linux end, it definitely helps to have previous experience with embedded systems. Owners of Raspberry Pi’s should have an easier time using the DragonBoard 410c, but since the community is still growing and there aren’t yet as many examples or discussions involving this board as there are with other developer boards, some may find it difficult to get started, or without much previous work to use as reference.

In general, I would say having patience—complemented by a willingness to explore the vast reaches of the internet and the many forums and discussion boards it contains—is the best advice for getting started with the DragonBoard 410c. If you keep working at an issue from different directions and learn from the experiences of others, you will find a solution eventually! And when you do solve an issue, make sure to share your solution with the rest of the community!

What does the phrase "Internet of Things" mean to you? How does it apply to your project(s) with the DragonBoard 410c?
The “Internet of Things” is an idea that I am finding increasingly important as smartphones and other connected devices gradually find their way into most of our day-to-day routines. In one sentence, IoT means a world where data is everywhere and everything we come into contact with is both processing and generating data in order to make our lives better. Every time I get one of my robots to speak to another device (another goal I will work towards with the DragonBoard 410c), I feel I am working towards a future where everything is connected in order to create new types of experiences and applications.

To keep up with Cyrus and his latest work with the DragonBoard 410c, robots, and IoT, be sure to check out his website.