With a world suddenly full of augmented reality enthusiasts thanks to Pokemon Go, can we here at Qualcomm be assume there aren’t others out there wanting to create augmented reality (AR) creatures of their own? The good news is that our developer of the month Aryan Behzadi and his company Triple-E are using a plethora of Qualcomm® technologies to help bring AR dreams to life. 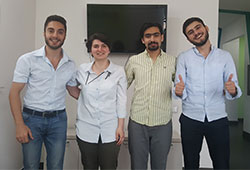 Hailing from Armenia, Aryan and co. recently won the top prize at IBM’s ISTC startup challenge, earning a place on IBM’s Global Entrepreneur Program (with $120K a year in IBM credits to sweeten the deal!).

Triple-E are developing an augmented reality platform that lets you create and view your own AR content. Triple-E will also notably contain a social element, allowing users to share their creations with others.

Aryan presented the concept in March 2016 with mentor Mohammad Kermani, and the platform was accepted onto the IBM startup accelerator. Aryan isn’t shy about his ambitions. “The usage of the platform has no limits: it can be applied in the construction industry, in marketing, education, interior design, entertainment and art.”

Triple-E has made use of AR technology for a while, and the Triple-E platform is the next step on a journey that Aryan thinks will move away from smartphones towards wearables. “We have developed different types of proprietary apps before, including one involving video mapping, an AR experience for a museum, as well as AR games,” Aryan says.

“If we want to bring AR to devices like smart glasses to life, we need to create a platform that works with low processing power, and low power consumption. We have been using the Trepn profiler to make the power consumption as light as possible, and we’re using FastCV for gesture, facial and movement recognition that is optimized for mobile devices.”

Six teams took part in the ten-week IBM startup challenge, which culminated with Triple-E’s big win on June 25th. We caught up with Aryan to talk about what inspires him and the company.

Tell us where you find your motivation and inspiration.
We generate bigger ideas when we work together - it’s that process that motivates us. That along with plenty of coffee, chocolate and jokes.

What is one thing that makes your company culture unique? Do you have any rituals?
The thing is that our employees are more than just employees, we are more than co-workers. Our relationship is not only in the working space. It’s like a second family, where we are creating the future of each member of the team together.

Share with us a fun fact about the team.
They are not very punctual, so whoever arrives last has to feed everyone else!

You and the team at Triple-E are working with quite a few Qualcomm® technologies in the development of your platform, how are you using these?
I don’t feel the need to create everything from scratch in order to bring a new idea into the world. In the development of Triple-E, we use FastCV and the Snapdragon SDK to make development easier. We use many others - It is an advantage for us to use a lot of Qualcomm products because we can create our ideas more quickly.

Do you have a technology hero?
Yes, Maryam Mirzakhani (Iranian born professor of mathematics at Stanford university, and the first female recipient of the prestigious Fields Medal). To me, she is someone who understands the meaning of ‘behind the numbers’.

What advice would you give to other developers?
As I mentioned, you don’t need to reinvent everything by yourselves. I often find the best tools for what you want to create already exist. Use them to improve your idea and come up with new ones!