This month, we’ve picked Andrew Sugaya, Senior Software Engineer at APX Labs as the Qualcomm Developer of the Month. Andrew and his company create software for wearable displays that are used in enterprise and consumer applications. You may remember that APX Labs won the Qualcomm® Uplinq™ Hackathon grand prize last year, after creating a solution to lower energy costs. Recently, APX Labs raised $10 million in Series A venture financing and Andrew and his team already have software being used in automotive, manufacturing, energy, healthcare, utilities, and other sectors. 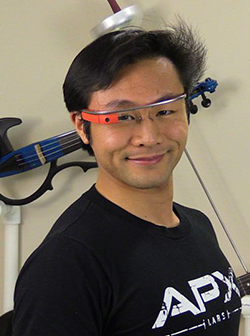 Can you tell us about your company and the apps you develop?
The fundamental belief behind everything we do at APX is that smart glasses will be a catalyst for improving the work experience for millions of people. The types of jobs can be anything – like nurses and doctors to field installation techs, assembly line workers to warehousing and logistics. These types of roles can be done better with real-time, hands-free access to information as we deliver that in our premier Skylight platform. Until recently the applications we make and the technology we use has only been theorized in science fiction and movies but is finally accessible to consumers and employers.

An example of the most recent consumer application we’ve developed has been for the NHL, our Skybox platform allows fans to watch a live hockey game and access game stats, rosters, and replays from different camera angles at the same time. Smart glasses allow fans to keep their eyes on the ice, while still having access to these experience-enriching features.

What do you love about developing mobile apps?
The thing I love most about developing mobile apps is the fact that when I go home, I can pull out my phone and use my own creations to make my life easier. There’s a sense of power that comes with being a developer. Being able to augment your life (and others) with applications that you develop is both a fulfilling sensation and an amazing motivation.

What are some development tools and resources you can’t live without?
In the world of augmented reality, computer vision is essential. And in the realm of computer vision, FastCV™ and Vuforia™ have been invaluable tools. When it comes to resources, as other developers would most likely agree, Stack Overflow is super useful.

If you weren’t a developer, what profession would you have chosen?
When I started college, I was set on becoming a surgeon. The plot twist came when I saw Iron Man. Overnight, I decided to throw myself into computer science and as it turns out, it was the best decision I have ever made.

What is one thing that makes your company culture unique?
At APX, all traditional rules set for the workplace are thrown out the window. The culture ranges from ubiquitous startup classics like Nerf wars and shoes-off meetings, to an ironic tradition we’re calling Well-Dressed Wednesdays—which turns the whole image on its head, making the place look like a traditional workplace.

What’s a fun fact about yourself?
I come from a samurai heritage (family crest and all). Perhaps as a part of that heritage, I enjoy being active—I love my morning jog to the gym, playing kickball, and going to yoga with my friends and coworkers.

Where do you and your team get inspiration for your work?
The developers in our team (myself included) joined APX Labs with the desire to live on the edge of innovation and change the world. As one of the companies at the forefront of smart wearable devices, we find our inspiration in the excitement of merging the physical and virtual worlds. Never before has the fusion of “what is” and “what could be” been available to architects, designers, and collaborators in such a novel fashion.

Where do you see the mobile industry in 10 years?
The mobile industry is going to be all about the connected world—the internet of things. As chipsets become smaller and even more powerful, they will become ubiquitous. The world will be full of devices that are able to gather data, control, and be controlled. With these devices all around us, smart wearable devices like glasses, watches, and rings will become a necessity – at APX, we think glasses will become the browser and I/O device of choice for the internet of things. As developers, it’s our job to create “extroverted” applications that are ready to live in this ecosystem.