Let’s think about what you’re going to need for the truly global Internet of Things and the devices you’re building:

For #1 and #2, embedded developers are already using the Qualcomm MDM9206 LTE IoT modem from Qualcomm Technologies, Inc. for LTE coverage and global multimode support in more than 90 different designs. (Your design may be one of them.) As for #3 and #4, we’ve released the Qualcomm® LTE for IoT SDK so you can take advantage of the chip’s on-board Arm Cortex A7 and pre-integrated cloud SDKs and cloud agents as well.

With the combination of the MDM9206 and the LTE for IoT SDK, you can build global IoT devices for use cases like asset tracking, smart lighting, utility meters, agriculture and manufacturing. And you can build them without the need of an external GPS, microcontroller (MCU) or security element.

Hosted or hostless, you can use the SDK to develop on Cortex A7

We designed the modem on the MDM9206 to cover eMTC (Cat M1), prevalent in North America; NB-IoT (Cat NB-1), prevalent in China, Europe, Asia and other regions; and 2G/E-GPRS as a fallback. Up to now, developers have used the MDM9206 in a hosted architecture without the SDK, running IoT applications on an external MCU and talking to the modem through an AT command interface.

Now, with the LTE for IoT SDK, you have a hostless option, too: Use the on-board A7 to develop with the advanced features in the Qualcomm API (QAPI) and built-in support for IoT cloud solution providers. You can save yourself the cost of the external MCU, the investment in cloud R&D and the headache of separate roadmaps for modem and processor.

The A7 is engineered to run a ThreadX RTOS image that is less than 10 MB in size and boots more quickly than a typical Linux image of about 40 MB. That means lower power consumption when your IoT apps wake up several times a day to exchange messages with the network or with a cloud service.

We’ve designed the SDK so you can develop on the MDM9206. Install the SDK on your workstation (Linux or Windows 10), build the application, load it to the LTE IoT development kit over USB, launch it and run it over the cellular network.

Then, connect to the cloud and take your IoT development a big step further.

To make it easier to connect to cloud services from the MDM9206, we’ve included a shim layer designed to map each provider’s cloud SDK or device agent through a porting interface to QAPI. The cloud device agent is defined by the provider. It contains software components for communicating with the cloud and resides in the MDM9206.

We’ve ported those agents onto the MDM9206, had them certified with their respective providers and distributed a shim layer for them so you can start using their cloud services right away. 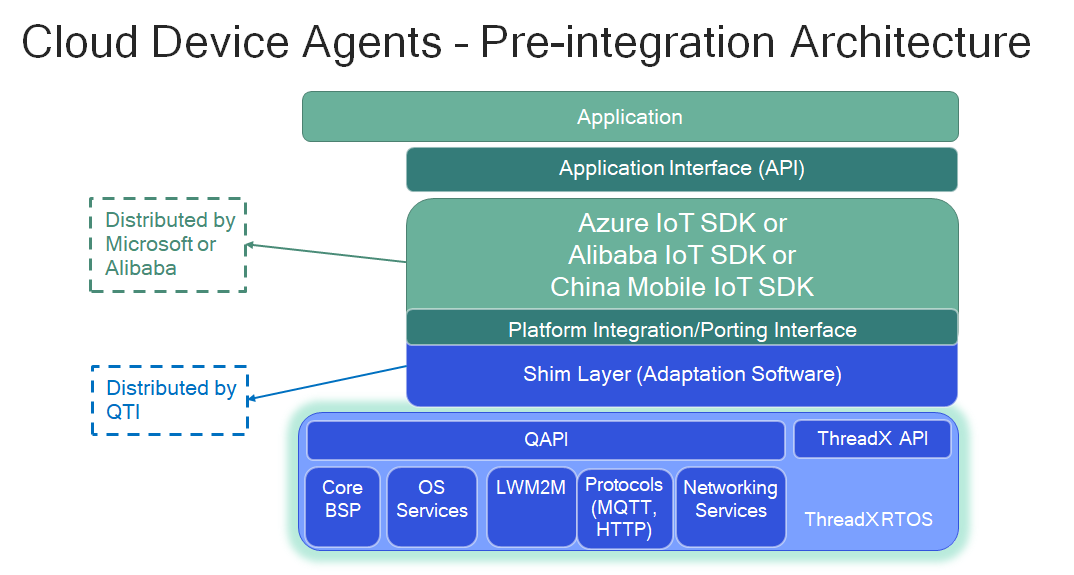 The LTE IoT SDK is available to other cloud service providers as well. They can port their agent, ensure that it works from the MDM9206 and distribute it to their customers. Cloud device agents verified on the MDM9206 chipset can be easily integrated, with no need to certify it with different module vendors. Their customers then go through app certification.

The following cloud solution providers have ported their agent to the MDM9206 using the LTE IoT SDK:

Come for the modem. Stay for the A7 and the cloud device agents.

The LTE IoT SDK and the MDM9206 are a great combination for cellular IoT devices, whether you want to go hosted or hostless.

If you run hosted — say, because you’re connecting to a specific type of sensor — you can design around your preferred external MCU and use the modem on the MDM9206. Our QTI roadmap gives you the features — HTTP, MQTT, TCP/UDP, TLS/DTLS — you need to keep evolving, so you can continue hosted while reducing your R&D costs to a simple AT interface and an AT handler application on the A7.

If you run hostless, you can connect your sensors directly to the MDM9206 and develop for your mass-production IoT device, with no need for an external MCU.

Either way, the LTE IoT SDK is expected to be supported in all future LTE IoT chipsets, with backward compatibility.

So it’s a great time to start building cellular coverage and cloud services into your IoT apps. The LTE IoT SDK is available for download now and you can order LTE IoT development kits and modules from multiple hardware providers.

New projects for video capture/playback and AI on QCS610
Accelerate your models with our OpenCL ML SDK
Riding the Wave of 5G, a Millimeter at a Time
How Juganu’s Smart Lighting Paves the way for the Smart Cities of Tomorrow
Pushing the Limits of Smart Audio Solutions with StreamUnlimited