Edge devices are playing a key role in IIoT, Industry 4.0, and Edge computing in general. Edge devices use sensors to measure and generate data about physical phenomena such as temperature, humidity, and acceleration. Sensors can include MEMS devices, chemical sensors, biosensors, and MOS sensors and may be fused to provide more comprehensive information or redundancy. In edge computing, these sensors are physically connected to an edge device equipped with a microprocessor unit (MPU) capable of processing the data and communicating with other devices or the cloud.

As edge computing evolves, new demands are being placed on edge technology, which is driving a trend towards the development and integration of smart sensors. A smart sensor is the next evolution of the sensor, whereby the sensing component(s), known as the base sensor(s), are packaged together with the MPU in a single (usually tiny) device. This trend is blurring the traditional definition of an edge device and is giving rise to the notion of the extreme edge. The extreme edge is where smart sensors take on more of the functionality traditionally done by the edge devices where sensors are commonly attached, or to near-edge devices like onsite servers. Now, the burden of processing, intelligence, data processing, and other functionality is handled by these new smart sensors to increase overall performance and enhance power efficiency. 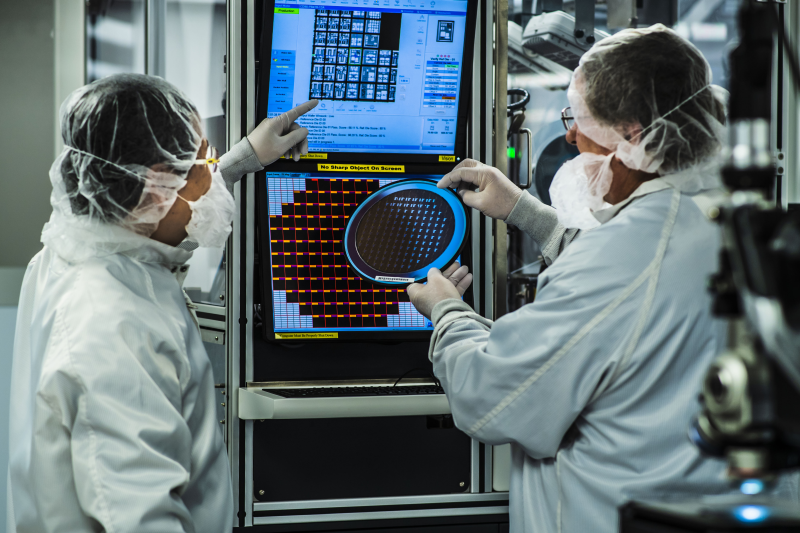 By integrating sensors and the MPU onto the same substrate, smart sensors can be implemented in smaller, low-cost packages suitable for space-constrained applications. They can also be more resilient to environmental conditions.

Smart sensors have four general functions they are expected to provide:

Common examples of smart sensors include level sensors which provide real-time metrics of contents in tanks (e.g., fuel), bins, etc., proximity sensors that detect motion and location, and temperature sensors which can measure environmental conditions or the properties of an object to which they’re attached (e.g., how hot a machine is running).

Demands for Getting Smarter

Several demands are driving the trend towards smart sensors. From a compute and security standpoint, growing deployments of edge devices can strain and increase loads on gateways, programmable logic controllers (PLCs), and cloud resources. By shifting as much logic as possible right to the sensor and making it more capable, data can be processed at the point where it’s acquired and filtered, reducing the amount of data that leaves the device. For example, a smart sensor might monitor data values, but only send data to the cloud when a certain threshold has been reached.

From a cost and logistics standpoint, organizations, especially those with large, difficult, or remote deployments, want small, low-cost wireless units that are easy to install. For example, smart sensors that monitor voltage on remote power lines may need easy installation and be capable of sending information wirelessly to the cloud via a nearby router. In addition, such organizations may also require lower power consumption, multi-year battery life, and/or onboard energy harvesting capabilities, especially for remote devices where maintenance access is difficult, dangerous, and costly.

There is also a growing trend towards self-diagnosis, self-calibration, and self-healing. Like any device, smart sensors can suffer from drift, faulty or failing base sensors, damage, or unexpected shifts in installation (e.g., when a unit is bumped out of its expected orientation). With so much dependence on correct data acquisition at the edge, many smart sensors include logic and even additional base sensors giving them the ability to detect, adjust, and/or alert of such issues.

Qualcomm Technologies, Inc. offers a number of SoC’s that could be used for the MPU in a smart sensor. Developers have a rich set of options to choose from with functionality ranging from basic compute to hardware-accelerated AI, along with multiple modes of connectivity like 5G, LTE, Wi-Fi, Bluetooth, and more.

Our Qualcomm® QCA4020 and QCA4024 SoCs and associated dev kits offer Bluetooth Low Energy (BLE), 802.15.4 connectivity, and numerous IO options for IoT applications. For applications requiring additional compute power, you might consider one of our AQP80xx series application processors that includes a GPU, hardware accelerated signal processing, and camera support. You can develop for the Qualcomm® APQ8016E Application Processor using the DragonBoard™ 410c development board.

For additional devices and development kits, see the Hardware tab on QDN. We also recently announced several new platforms for developing next-generation IoT devices, so be sure to stay tuned.

For further inspiration, check out the following IoT projects on QDN that incorporate sensors:

Qualcomm QCA4020/4024 and Qualcomm APQ8016 are products of Qualcomm Technologies, Inc. and/or its subsidiaries.