"None of this should work, but it does. It’s crazy, but it works."

Believe it or not, many of us at Qualcomm Technologies, Inc. (QTI) say things like that when we’re describing the technology that makes 5G tick. QTI has designed components that your apps will use for moving data in healthcare, logistics, immersive entertainment, sustainable cities and public safety, so here’s another look under the 5G hood. Last month I posted about the 5G rollout and roadmap. In this blog I’ll describe the innovative, multimode modems, RF Front-end (RFFE) and antennas from QTI that take 5G out of the world of "none of this should work" and bring it into the world of "but it does!” I’ll also cover the role of beamforming and beam tracking in 5G.

At its most basic, "multimode” means that the modem needs to support 5G and offer backward compatibility to previous generations of cellular technology. In other words, the modem needs to cover a very active past and present while paving the way for a very diverse future. But industry standards for 5G go far beyond that:

That’s what the Qualcomm® Snapdragon™ X50 5G Modem-RF System does. As a 5G chipset solution that pairs with the Snapdragon 855 mobile platform, the Snapdragon X50 lets OEMs design both 4G and 4G-5G smartphones around the same chip.

Of course, delivering on 5G goes far beyond modulating and demodulating a signal (the fundamental work of a modem). For example, just to operate in the bands below 6 GHz, here is a simplified view of the path between the modem and the antennas:

Besides touching the modem (or baseband) chip, the path winds through an RF transceiver, an RF front-end (RFFE) with multiple sub-components including power amplifiers, filters and switches, and finally out to the antennas, which are shared with Wi-Fi and GPS.

And then there’s mmWave, which needs its own antenna elements (for reasons I’ll describe later). For mmWave, the Snapdragon X50 Modem-RF System features the Qualcomm® QTM052 mmWave antenna module. The QTM052 contains not only mmWave antenna elements, but also the transceiver and RFFE components. It bundles a lot of technology into this small package: 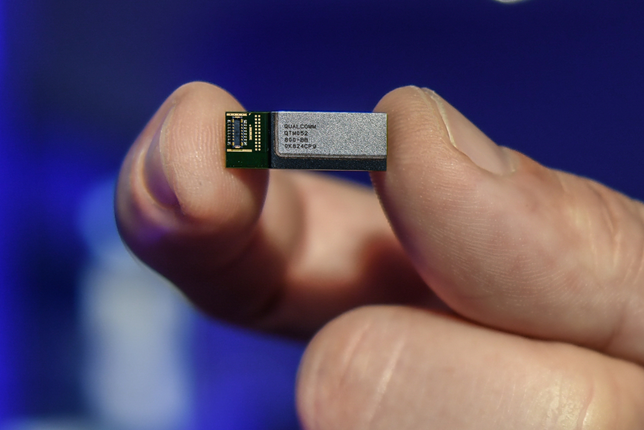 For 5G to expand in 2020, it must run on the networks launched by any major operator in the world. That’s why the next member of the family, the Snapdragon X55 5G Modem-RF System, supports all 5G, 4G, 3G and 2G cellular communication standards in virtually any region and any suitable frequency bands.

The Snapdragon X55 takes multimode a notch higher with innovations like the following:

The result is a comprehensive modem-to-antenna solution for getting data over 5G to and from mobile devices:

The Snapdragon X55 will drive the second wave of 5G devices including not only smartphones but also 5G Wi-Fi hotspots, laptops, tablets, connected cars and fixed-wireless customer premise equipment (CPE).

Now that you’ve seen what goes into the hardware, you can understand some of the work it has to do.

The speed of 5G will depend on the airwaves the wireless carrier uses. Airwaves at frequencies below 6 GHz, for example, travel far but they provide limited capacity for the ever-growing demand for data. mmWave airwaves at frequencies above 24 GHz, on the other hand, provide lots of capacity but in smaller areas compared to sub-6. Ultimately, operators will use both sub-6 and mmWave to deliver the coverage and capacity needed now and in the years to come.

mmWaves are a greenfield opportunity. Up to now, they haven’t gotten much use because the technology was not available to work with them in a cellular network and pack the power and antenna requirements of mmWave into a mobile device. To get any use out of mmWaves in cellular, you must think differently about how the cell tower is going to transmit them and how the device is going to receive them. QTI’s innovative R&D and chipset solutions like the Snapdragon X50 and Snapdragon X55 do just that.

Think of the antennas in today’s cell tower as floodlights, covering the area in front of them with a well-directed cone of radio energy. If your device is in the cone, it receives some of that energy. That’s the model for getting a signal from a tower to a mobile device.

But to overcome the propagation limitations of mmWave, it’s better to focus all of the radio energy in a single direction. Rather than using a floodlight model, a 5G mmWave system uses something akin to a laser — or a beam, more precisely. The antenna tracks the device and focuses the beam of energy on it at all times. That’s beamforming. If you’re smart about the way you send this kind of radio energy out of the antenna, you can aim the beam in a particular direction.

Of course, the mobile device has to be equipped to send and receive mmWave beams, and that’s where the Snapdragon X50 and Snapdragon X55 5G Modem-RF Systems come in.

The cell tower transmits multiple beams, and they are bouncing everywhere — off of buildings, light poles, vehicles — eventually hitting the device. On the device, the array of tiny mmWave antenna elements packed into the QTM052 and QTM525 modules detects the incoming beams and finds the one with the best signal. That is beam tracking. The device then sends out its own beam directed in a way that eventually finds the tower. The device and the network exchange information constantly, directing beams in a way they can best reach each other.

mmWave technology works well in cities, where you can locate a small cell on top of a building and serve an entire block. In a dense, urban environment, the buildings would normally be an obstruction. But beamforming and beam tracking take advantage of them as an endless series of surfaces off of which the mmWaves can bounce.

On the device, multiple mmWave antenna modules like the QTM052 and QTM525 are located in different places, as shown in the image below. The baseband modem switches among the antenna modules, depending on the source of the strongest signal. All of that takes place in real time in fractions of a millisecond.

Adding up to ~7Gbps

Now you see why we say things like, "None of this should work, but it does. It’s crazy, but it works."

What does all this innovation add up to? The Snapdragon X55 makes it possible to combine 800 MHz of 5G mmWave bandwidth and LTE bandwidth to help achieve about 7 Gbps peak downlink throughout.

Before long, of course, we’ll take hundreds of megabits per second of throughput for granted. But all of that innovation in throughput is the result of years and years of R&D, with huge contributions from our colleagues here at QTI.

5G is designed to be a connectivity fabric for nearly everything — not just phones. The goal is that you won’t think twice about adding cellular connectivity to any object.

To find out more about beamforming, beam tracking and the radio components that make them possible, have a look at the white paper, "Exploring the Potential of mmWave for 5G Mobile Access" from Heavy Reading. And listen to our podcast, "You Had Me at Beamforming."

The more you know about what goes into 5G, the more ways you can find to take advantage of it in your apps.

Qualcomm Snapdragon, Qualcomm QTM052 and Qualcomm QTM525 are products of Qualcomm Technologies, Inc. and/or its subsidiaries.